What It's Really Like... To Be A Fencing Instructor

John McCabe is a fencing coach, which trains students at Dundalk IT and Carlow IT. He also runs his own private club in Louth, Boyne Valley Fencing Club.

Tell us a little about what you do…

I started fencing at the tender age of 18, when I began in college all the way back in 2006. After two years of travelling to different clubs for extra training and holding down a night job bartending, my hard work started to pay off.

END_OF_DOCUMENT_TOKEN_TO_BE_REPLACED

With the encouragement of my old coach Marcos Simpson and equally competitive club mate and sparring partner Christopher Mooney, I started moving up the Irish ranks, where I ranked number five in Men’s Sabre. I am delighted to say I have had many successes in Irish Fencing including being selected for the Irish Five Nation Squad, which selects four in every weapon to compete against the top in England, North Ireland, Scotland and Wales.

It is important to mention there are three weapons in fencing; foil, epée and sabre, all with different target areas and tactics.

With my semi-retirement, I starting training some of Ireland’s newest fencers and have a cadet fencer just back from a Junior World Championship on Paris in the start of February, one of my club members also ranked number 1 in the Women’s Sabre rankings in 2012 and a current student of mine competing alongside me in the Irish Squad in the Five Nations 2013 after two years fencing.

How did you get to your current position?

I acted as an assistant coach to my old coach in Dundalk IT back in 2009-2010 and then we went on to open our own club in Drogheda, Co. Louth.

With Marcos’s retirement, I took over both clubs and discovered a niche market in the inner counties of Ireland that were not all being catered for, where there was an interest in fencing. I went on to open Carlow IT Fencing Club in 2011, where numbers have been increasing year on year.

What is your typical working day?

END_OF_DOCUMENT_TOKEN_TO_BE_REPLACED

A working day for me never ends really! There are always competitions throughout the academic year at weekends, all over the country. With coaching, training, competitions and travel, I am pretty much on the go morning to night.

I pack the car with the gear I need for the given day and I get to training about a half an hour before each session. As they are all evening classes, I have the perk of being flexible with my day. Most of my classes will go on for three to four hours and in the case of my Drogheda class, it is split into children’s classes and adults. I then do the usual car packing and head back on the road for home. I would usually make it back for around 11pm so it definitely isn’t a 9am to 5pm job!

With myself and students competing nearly every weekend, I spend most of my weekends in sport halls all over and Ireland and Northern Ireland, either competing or coaching. If I’m not doing either of those, I am always whipped into refereeing. The joys of it being a small enough community, everyone knows you!

Why did you choose your current career?

I am one of the lucky few in this country who can actually say I turned my passion into a career! I never take that for granted. As soon as I started fencing in college and competing, I met some of my now closest friends and realised that this was something I could not leave behind when I finished college. 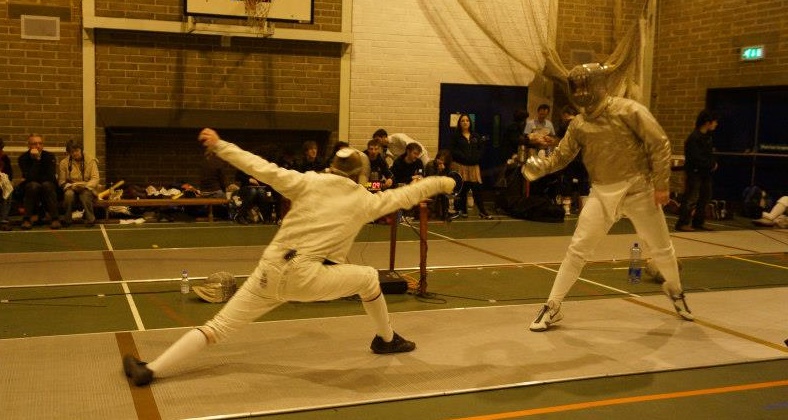 END_OF_DOCUMENT_TOKEN_TO_BE_REPLACED

What are the biggest challenges you face in your career?

One of the biggest challenges I face is the introductory phases of fencing because people think that you can just walk in, pick up fencing gear and a sabre, and jump on the piste (the electrics for fencing). If I had a euro for every time I heard in a beginner’s first training session, ‘when do we get to hit each other?’, I would be a very rich man.

It takes time to teach someone the extensive foot work, how to perform fencing moves properly and the rules of the sport. Sometimes it’s hard for people to get past this stage because they just want to hit each other straight away but obviously, this is dangerous. I try making it fun by creating games where they are unknowingly learning fencing moves at first, rather than me just standing at the top of a room and showing them.

What are the most rewarding aspects?

The most rewarding aspect by far is bringing fencers that have worked so hard all season to a competition and seeing them achieve their set goal; whether that be winning, medalling or just beating their pre-empted competitor. When they learn from their mistakes and listen to my advice, and it works, that always puts a smile on my face coming home and makes it so worth it!

Does your job involve a lot of travel?

In one answer…. YES! Being located in Dublin is handy for most things but when it comes to my job, it means a lot of driving!

My travelling hours can rack up anywhere between 20 to 30 hours a week. I would be lost without my car.

What is the best piece of advice that you’ve been given?

Remember to breath and take your time. Focus on what you and your opponent are doing.

What has been the one ‘pinch me’ moment of your career so far?

As a fencer, it would have to be the first time I was selected for the Senior Five Nations team. As a coach, whenever one of my students performs well in a competition.

What do you think is the biggest misconception about what you do?

That my job ‘is not actually work’ because it is my hobby. This is far from the truth because one thing about my career is that there is a lot of take home stress and I have constant contact with students who need something, whether that be gear, advice or a lift to a competition.

What is the biggest mistake that you think people in your chosen sector make?

The biggest mistake is that people that coaching ‘isn’t that hard. There are a lot hurdles to overcome when opening a club from getting your coaching certificates, insurance (which is expensive!), getting the members and making them stay!

Describe what you want to achieve in your career with one sentence.

To continue spreading the sport to younger generations and to break the ‘it’s only for the rich’ stigma associated with fencing.