Comment: Won't somebody please think of the (gay) children?

The first time I saw a gay character on television I was about seven years old. I was watching Xena: Warrior Princess, and I was intrigued by the relationship between Xena and Gabrielle.

It seemed that the two of them were more than just friends, but as a child, I was ill-equipped to understand what was happening on my screen. I knew there was something going between the two, but I didn't have the vocabulary to articulate what I was feeling.

When I got older, I realised that a lot of people thought this about the two women, and in the new reboot of the series, they are officially a couple.

END_OF_DOCUMENT_TOKEN_TO_BE_REPLACED

As a LGBTQ kid growing up, depictions of gay relationships were almost non-existent, or something I had to invent between two characters.

Children's television in the 1990s had almost no evidence of gay characters, except for maybe Phil and Lil's mam in Rugrats.

For young people and children struggling with their sexuality, to see little to no evidence of gay, lesbian, trans, bisexual or otherwise not straight people in the media that they consume is disheartening and does untold damage.

Which brings me to my point.

Yesterday I wrote an innocuous article about a trend on Twitter to make Elsa from Frozen the first LGBTQ Disney princess/queen.

Some of the comments below the line of the post were really upsetting reading. 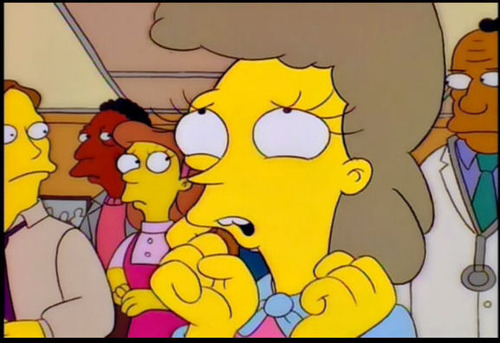 'Won't somebody please think of the children? (Except gay children, who don't exist (via Tumblr)

First of all, there was no mention of sex in the article. Same-sex couples are just like opposite-sex couples, and contrary to your belief, do not spend all their time having sex.

It would mean that a little girl who might grow up to like girls could possibly see two female characters kiss in a very G-rated, Disney way, and they would then feel like it was ok to be themselves.

First of all, you're using the phrase 'PC gone mad' and this automatically makes you sound like someone's racist nana. Please stop. Also, what's wrong with the LGBTQ community campaigning for better representation?

Ok, there was no evidence of a romantic relationship in Elsa's life at all, so what proof do you have that she isn't possibly gay?

The point is that young children who are LGBTQ (yes, they exist, don't be shocked), will see same-sex relationships be normalised and accepted. I fail to see the problem.

Some young children are gay. Can you think for a minute about what it would mean to a little boy of 8 to see two boys holding hands in his favourite tv show?

Boycott away, pal, I'm sure you'll be missed.

This is not about adult politics, this is about creating better media for children, and for all of us.

Even if this doesn't come to pass, I was shocked that so many people were projecting their homophobic attitudes (because they are homophobic), onto a children's film.

No child will see the problem with two boys kissing unless an adult in their lives teaches them that it is a problem.

You are saying 'let kids be kids.' But what about the gay kids?

It's not all terrible however, Cartoon Network's Steven Universe is a shining example of a heartwarming and brilliant portrayal of a gay couple (Ruby and Sapphire) in a children's tv show.

Representation is vital for young LGBTQ people, and they are currently being failed by Hollywood.

It's not good news.

Just 22 out of 126 releases from the 2015 slate depicted characters that were identified as lesbian, gay, bisexual or transgender.  “Transgender representation is shockingly low with only one character in the mainstream releases of 2015 – whose brief appearance served as a punchline to laugh at when her identity is revealed.”

"The film industry must embrace new and inclusive stories if it wants to remain competitive and relevant.”

So, representation for LGBTQ people in Hollywood films is at a low. You might still be wondering why this is important.

The media is where people go to see people like them. People they can relate to, and see aspects of themselves in. So, by seeing yourself reflected back on television, it makes you feel accepted and cared about.

LGBTQ people are starved of representation compared to their heterosexual counterparts. To see a gay character or a storyline dealing with trans issues is still a novelty in the media.

You don't see yourself. You feel invisible. Isolated. Like a freak.

Representation matters. Seeing people who feel, act or look like you in the media matters.

If you have a problem with seeing same-sex relationships in the media, don't bother hiding behind 'think of the children' as your excuse to voice your disgust directed towards the LGBTQ community.

In the words of Elsa herself, let it go.

popular
Traditional names such as Mary, Maureen, John and Michael may soon be extinct
First case of monkeypox confirmed in Republic of Ireland
Young mum packs her bags and travels the world with 3-year-old son
Doctors urge women not to follow Kourtney Kardashian's 'semen' fertility advice
This girl absolutely SCHOOLED this guy for sending an unsolicited dick pic
Viewers praise Dermot Kennedy for "powerful" performance after Late Late Show finale
The 2 Johnnies share unbelievable catfish ordeal as woman 'targets 40 people'
You may also like
1 week ago
Lesbian couple attacked in Dublin thank public for support
1 week ago
Footballer Jake Daniels applauded for coming out as gay
3 months ago
Limerick city gets its first pride rainbow crossing
6 months ago
People are loving this viral Christmas ad with a gay Santa
7 months ago
Outrage after woman diagnosed with "homosexuality" as "current illness"
9 months ago
Love Island boss says they're still trying to figure out how to make an LGBT version work
Next Page