Woman goes to christening and then ends up in Ibiza

For some, family occasions can get a bit loose. You only see your extended family every now and again, and end up drinking your aunt's house dry.

It happens every once in a blue moon, but when it happens you either wake up in a great mood or with the absolute fear. 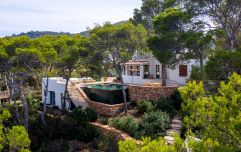 END_OF_DOCUMENT_TOKEN_TO_BE_REPLACED

Did you insult your uncle? Did you get sick in your cousin's room? Did you go to Coppers with your mum?

This woman didn't do any of those things - but instead, she ended up in Ibiza.

Rachel Wynn from Manchester attended a christening and then went to meet up with friends after she had a few drinks... next thing she knew, she was on the Spanish island.

She told the Manchester Evening News that it was a "big mistake" and all she took with her was her bank card and passport.

"My friends were already here in Ibiza and asked if I wanted to come. I've come out here with the clothes on my back, my bank card and my passport."

"I can't remember it," she said of the flight over, adding that she "was p*ssed, absolutely p*ssed."

Her boss wasn't too happy about her decision when she called her work to tell them the situation, however she says that "hopefully he'll see the funny side."

popular
Vogue Williams slams man who refused to swap seats with her on plane
Mum charged with murder after allegedly leaving baby in hot car
This is the exact date the weather will get warm again
New Zealand family find two bodies in second hand suitcases
Are we getting a mini heatwave in September?
23 shows with four or more seasons to watch on Netflix
This is the easiest way to determine you may have VIKING heritage
You may also like
3 years ago
Love Island's Wes Nelson and Caroline Flack look SUPER cosy in Ibiza
4 years ago
Dr Alex left a 'dreamy' comment on a bikini snap of Caroline Flack and everyone is losing it
4 years ago
5 rom-com movies like Set It Up that are available on Netflix now
4 years ago
A Fanta Lemon alcoholic slushie is the only drink we NEED on a day like today
4 years ago
Juice, yoga, workouts, and sunshine: this July Ibiza retreat is wellness goals
4 years ago
It's Michael Fassbender's wedding weekend in Ibiza... and he's living it up
Next Page