How often do you clean your makeup brushes?

Apparently, we should be giving them a good wash every few weeks due to the build up of bacteria, dead skin, and old product.

However, it's unlikely that many of us get to stick to this rigorous routine due to busy-ness, forgetfulness, or just plain old laziness. 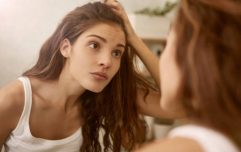 END_OF_DOCUMENT_TOKEN_TO_BE_REPLACED

As it turns out, dirty makeup brushes don't just give us acne, they can also leave us with very serious infections if we don't tend to them properly.

Twitter user Katie Wright has had such an experience, and she took to social media recently to share it.

She posted before and after photos of what happened after she tried to pop what she thought was a "giant under the skin pimple."

But after a few hours, she says her face started to swell up, becoming incredibly painful.

"It felt like something was going to burst out of my skin.

I went to the emergency room and they said it was a very severe case of Cellulitis, which is a version of  Staph infection (...) Since it was on my face there was a huge risk of it spreading to my brain or my eyes causing me to go blind.

She went on to say that she believes this most likely happened because of bacteria on her eyebrow pencil brush.

Katie said that although she is usually very strict about cleaning her brushes, she never thought to wash the eyebrow spoolie.

“If you wear makeup PLEASE make that a step in your cleaning routine.

It's a small thing to do to avoid a painful, expensive and traumatising infection on your face.”

Katie's post went viral within a few hours, with many expressing shock over the damage that an unclean makeup brush can cause. The common household item that will set your makeup PERFECTLY

END_OF_DOCUMENT_TOKEN_TO_BE_REPLACED

When washing makeup brushes, it's important to use lukewarm water and a gentle cleaning product like baby shampoo.

The bristles need to be rinsed in the water mixture and then patted dry before using again.

Katie has since posted an update of her face's condition, less than a week after her original post.

the swelling difference from the Staph pic.twitter.com/elXbLnhLfG

She has since joked on Twitter about going viral "for being ugly."

Katie's GoFundMe page to pay for her medical bills can be found here.

Girls With Goals || Her · Ep.153: Scholarship Squad - We chat to Facebook's Claire O'Hara about our Smurfit Scholarship fund.
popular
The latest TikTok beauty trend is drawing on under-eye bags to look tired
Dad designs bikini line for transgender teens
Someone has ranked the penis size of men from all over the world
Award winning Irish film about conversion therapy debuting this weekend
Here's what happens on every day of your menstrual cycle (roughly)
Kylie Jenner just posted a naked snap on Instagram, and people are NOT happy
Matthew Perry's dad was a character on Friends and how did we not notice?
You may also like
2 weeks ago
3 makeup trends that are on the way out in 2021
1 month ago
Irish makeup artists use their face as the canvas with these next-level looks
4 months ago
Save, Spend, Splurge: 3 mascaras for longer lashes in every price range
4 months ago
There's a Friends makeup collection coming, featuring Phoebe, Monica, and Rachel palettes
4 months ago
Charlotte Tilbury reveals new Bejewelled Eyes to Hypnotise instant eye palette
4 months ago
4 big beauty routine changes I've made this year
Next Page