Most women are turned off by a lad if he has a messy bedroom.

A considerable 51 per cent of women have said that if they went back to a guy's gaff and their bedroom was messy, the mood would be instantly killed.

END_OF_DOCUMENT_TOKEN_TO_BE_REPLACED

Bad news for the hoarders everywhere, so.

The research, conduced by Storage World, showed that out of all the things that are potentially ruining relationships, having too many things scattered around your room is one that people aren't all that aware of. 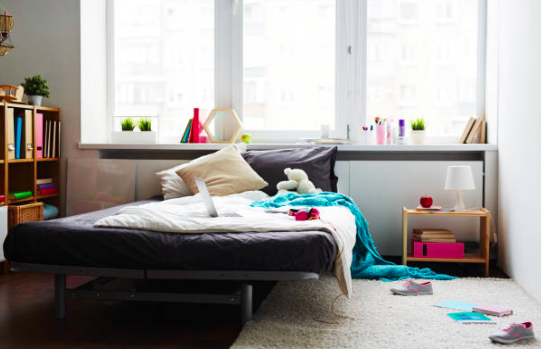 While just over half of women are turned off by a messy room, only 25 per cent of men feel the same, which honestly says a lot more about lads than it does us.

One night stands aren't the only scenarios where messiness is causing problems though.

Apparently, almost three quarters of people in relationships are afraid to confront their other half about their messy habits, despite the fact that lack of communication in a relationship is absolutely going to cause problems in the future.

So lads, if you want to pull, you might want to start pulling all your shit together (and placing it in a storage unit out of sight).

Girls With Goals || Her · Ep.160: The Beauty Of Coaching - Hayley Harrison joins us from Sport Ireland
popular
Doctors warning young people against 'sun cream contouring' TikTok trend
28 amazing Irish glamping spots for your 2021 staycation
Easy DIY: A super-chic pallet daybed for garden entertaining
Louise Redknapp just admitted a shocking truth about her ex husband, Jamie Redknapp
The countdown is on! 10 things we'll be racing to Penneys for when they open
Someone has ranked the penis size of men from all over the world
More footage of Tristan Thompson cheating on Khloe has emerged
You may also like
1 week ago
Queen gives sex toy company royal honour - and rightly so
1 week ago
Sexual Experience Survey results: Over half of Irish women believe orgasmic sex is one of the top three greatest pleasures in life
1 month ago
Vaginismus: Sex therapist explains the psychological impact it has on women
2 months ago
Only half of young people say they are exclusively attracted to the opposite sex
2 months ago
"It allows for more freedom": Bridgerton's intimacy coordinator on pre-planned sex scenes and working with trauma
5 months ago
Agony Can't: "My boyfriend refuses to wear a condom as he says they are uncomfortable, what should I do?"
Next Page