The girls were wearing crop tops.

Two TikTok users are furious after they claimed they'd been kicked out of Wetherspoons for wearing "inappropriate" tops.

Mollie Wood posted a TikTok saying that she and one of her friends were asked to leave the Back of Beyond Wetherspoons bar in Reading, allegedly for what they were wearing. 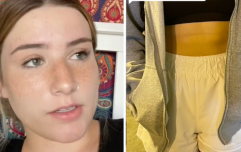 END_OF_DOCUMENT_TOKEN_TO_BE_REPLACED

Explaining how they had been allowed entry only days prior, and had made it halfway through the restaurant after being IDed before the incident went down.

"When we asked for the reason, they said it's because we're 'comparable to men taking their tops off.' Why are women with bigger boobs sexualised to the extent where it's compared to men that don't wear tops?"

The girls were wearing crop tops that covered their breasts, but still showed off their cleavage, which are very much in fashion at the moment.

But due to the cropped nature of her top, Mollie and her friend were deemed to be dressed inappropriately despite nothing being on show.

END_OF_DOCUMENT_TOKEN_TO_BE_REPLACED

She added: "Why are cleavage and boobs inappropriate? Why are boobs so over-sexualised?"

The girls were quick to point out that it was 26 degrees, so they were dressing for the hot weather, and that because they had larger breasts, they were looked at in a more sexual way.

The video has gone viral, getting nearly half a million views and the comments have been swarmed with others sticking up for them.

One user noted: "Since when did spoons have a dress code anyways"

Which Mollie replied to say that they in fact don't have a dress code at all.

popular
You can now get paid to watch every episode of Grey's Anatomy
POLL: Vote now to see which side you're on in this Irish head-to-head battle
Love Island: You need to see Millie's dad's Instagram
Love Island fans spot Millie and Liam doing same weird gesture in bed
Love Island: Kaz's family issue statement after "vulgar racist abuse"
The islanders are in for a cinematic treat full of their own drama tonight
18-year-old TikTok star Timbo the Redneck dies after stunt goes wrong
You may also like
7 hours ago
'Pasta skewers' are the new food trend dividing TikTok right now
7 hours ago
18-year-old TikTok star Timbo the Redneck dies after stunt goes wrong
3 days ago
3 seriously amazing Ikea hacks we are dying to try after spotting them on TikTok
1 week ago
This TikTok hack gives your hair instant volume
1 week ago
People are sharing why they wouldn't go on Love Island, and their reasons are gas
3 weeks ago
People are turning pasta into crisps – and actually, it's kind of delicious
Next Page