You would imagine that the world's deadliest cat would be something big and ferocious.

But it turns out it's actually a critter called the black-footed cat - and they are beyond adorable.

BBC Earth recently shared a clip from the documentary Big Cats, where viewers were introduced to mother cat Gyra and her kitten.

As sweet and huggable as the black-footed cats look, though, you may want to keep your hugs to yourself.

The teeny-tiny felines are the "deadliest" cats in the world due to the fact that 60% of their hunts end successfully.

The Big Cats production crew found Gyra and her little one in the Karoo desert in Southern Africa.

"This peek into the life of the black-footed cat embodies their character well. Despite their sweet exterior, due to their diminutive size, they hunt with deadly precision and tenacity.

"They are such charismatic little killers, particularly Gyra with her 'scary eye look'! She looks so innocent but then is such ruthless and efficient killer. 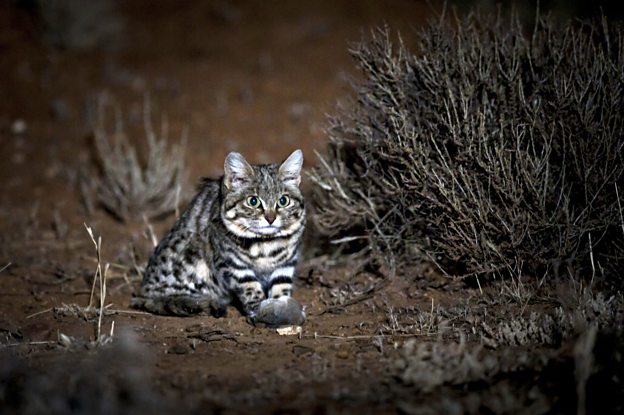 "This is a great example of collaboration, which was only possible through the perfect timing of the BBC film crew arriving in time to film the females caring for their kittens in the wild.

"This is no small feat, as black-footed cats are notoriously shy and mobile, and only our deep insight and long-term knowledge of them has made this possible."

In the premiere of the show, they also looked at the world's smallest cat: the rusty spotted cat, who is so small he'd fit right in your hand.

popular
Baby dies next to mother who drank 'two or three' bottles of wine then fell asleep
Little boy dies of cancer after doctors ignored mother's warnings six times
Love Island's Zara's brother reveals the real beef going on between her and Olivia
Funeral of Cork toddler takes place after choking accident
Gwen Stefani reportedly pregnant with baby number four
Abigail Breslin marries longtime love Ira Kunyansky
Molly Mae: "Thank you for entering this world safely for us"
You may also like
2 months ago
'Incredible' Netflix drama series is so good people are binge-watching it in one night
5 months ago
Peaky Blinders actor to star in Magdalene Laundries BBC drama
5 months ago
David Attenborough is coming to Ireland for new nature documentary
6 months ago
Prince Andrew's infamous BBC interview to be made into a film
7 months ago
BBC issues correction after using Irish tricolour during jubilee concert
8 months ago
Deborah James thanks fans as book goes straight to top of Amazon's bestsellers
Next Page