It's easy to forget just how public the internet really is.

We all know that anyone can read anything we've said on Twitter or any of the other numerous public forums we share information about ourselves on, but do we really understand it?

Football fans spend a large part of every weekend talking shit about players that they would never dream of saying to the faces, and we've all done it on some level. There's something about posting it to a computer screen or on your phone that just makes it feel a little less real. 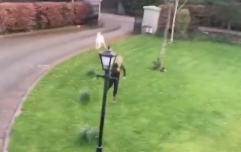 END_OF_DOCUMENT_TOKEN_TO_BE_REPLACED

But we're slowly starting to realise that there's not really any distinction between "online" and "in real life" besides the fact that there's a documented history of what you say online.

You don't even need to tag in the person or company you're complaining about for them to find you anymore, as Twitter user Joe Lee found out to his dismay when he sent out this tweet on Saturday:

Worst thing about me mother not answering her phone, is her voicemail reminding me that she's on the absolute poverty Tesco Mobile.

We've all complained about a service online before, and maybe when you're feeling really angry you'll tag them in just to annoy their customer service team who have to pretend to be your best mate as they try to solve your problem in 140 characters or less.

At this stage, it's accepted that the company's customer service team will just send out a friendly - if not passive-aggressive - message in response and you'll all get on with your lives.

But it turns out that Tesco Mobile are a bitter bunch, and they weren't going to take such a slight lying down as they absolutely rinsed poor Joe Lee in response.

Nah the worst thing is your own mother blatantly ignoring your calls.

Needless to say, it went down pretty well with the rest of Twitter.

Girls With Goals || Her · Ep.151: 'A Story Shared' - Aoife P. Rafter on blogging during a pandemic and living with CF
popular
QUIZ: How well do you remember The Princess Diaries?
Ross was never meant to say Rachel's name at the altar, Friends writer reveals
'I feel betrayed': Curtis Pritchard on Maura Higgins and Chris Taylor's relationship
QUIZ: Can you complete these iconic Girls Aloud lyrics?
All the series and movies you need to see before they leave Netflix in December
'There aren't any plans': Ruth Jones denies rumours that Gavin and Stacey is returning
You may also like
2 weeks ago
Dublin Airport had brilliant response to Wild Mountain Thyme
6 months ago
Lisa McGee's Tweets about the Derry Girls' favourite movies are pretty much perfect
9 months ago
Hugh Grant truly is Daniel Cleaver after last night's Bridget Jones joke at the BAFTAs
11 months ago
8 things that happen in EVERY Irish household on Christmas Day
11 months ago
WATCH: We tried eggnog for the first time and have some very important thoughts
1 year ago
Remember the Toy Show's JohnJoe Brennan? He's going to be on RTÉ One tomorrow night
Next Page