A serious multi-vehicle collision on the M50 Northbound this afternoon which saw two lanes closed has now been cleared.

The collision occured between junction seven Lucan and junction six Blanchardstown this afternoon.

The accident has now been cleared and all lanes are open, however delays are to be expected.

Serious collision on M50 Update: all lanes are now open but expect delays 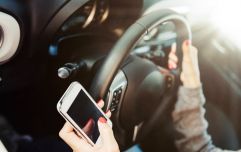 END_OF_DOCUMENT_TOKEN_TO_BE_REPLACED

It is not yet clear whether there were any injuries in today's collision.

The incident comes in the wake of a fatal accident on the M50 southbound yesterday afternoon which saw a man lose his life after being struck by a lorry near Junction 6, Blanchardstown.

popular
Netflix's true crime series Sins of our Mother is seriously insane
So, William and Harry have a step sister... and who knew?
Why Are Men so Obsessed With Boobs? The Answer is Pretty Surprising...
Body language expert says Meghan and Harry were having a row at Eugenie's wedding
Someone has ranked the penis size of men from all over the world
Love Island's Paige opens up on the moment she changed her mind about Jacques viewers didn't see
This is how often you should have sex according to your age
You may also like
3 days ago
Here's why Iranian women are protesting the country's morality police
4 days ago
Charlie Bird to be awarded Freedom of Wicklow
4 days ago
Widespread protests in Iran after woman dies in police detention
1 week ago
Ryan Reynolds shared his experience of getting a colonoscopy after losing a bet
1 week ago
Christina Aquilera unfollows Britney Spears on Instagram over bizarre fat-shaming post
1 week ago
Apparently, the Queen had a special pancake recipe and someone just shared it online
Next Page