It's the first great festival of the year.

The hard part is complete; you're there, you've gotten the wristband on and the drink tent is in your eye-line.

What better way to kick off your Bulmers Forbidden Fruit guide then by helping you re-jig your musical memorandum? Get these in the diary.

These lads have been going strong since 2000 and have released six albums. They are just back on the road again after a year's break. Not to be missed.

This deep house, London DJ has shot to fame with 'You Don't Know Me' but also had a hit in 2014 with Duke Dumont, the brilliant 'I Got U'. Jones has done the college rounds this year, playing in Galway and Sligo during their respective Rag Weeks.

One of Ireland's most recognisable voices doesn't really require an introduction, does she?

Giggs was signed to XL Records in 2009 following his debut album, Walk in Da Park. His latest LP, Landlord, entered and peaked on the UK albums chart at number two. 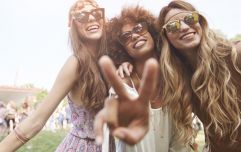 The ultimate festival outfit guide if you're heading to Forbidden Fruit

END_OF_DOCUMENT_TOKEN_TO_BE_REPLACED

The 23-year-old producer from Newcastle, Australia is now based in London and is heavily influenced by the working-class steelworks of his hometown. His house and techno rooted music is self-described as "stripped back, minimal but atmospheric."

Girls With Goals || Her · Ep.151: 'A Story Shared' - Aoife P. Rafter on blogging during a pandemic and living with CF
popular
'I feel betrayed': Curtis Pritchard on Maura Higgins and Chris Taylor's relationship
'I loved it': The childhood drug addiction that inspired The Queen's Gambit
Viewers praise Corrie for emotional scenes as Leanne's son Oliver passes away
Ross was never meant to say Rachel's name at the altar, Friends writer reveals
All the series and movies you need to see before they leave Netflix in December
Here's what happens on every day of your menstrual cycle (roughly)
Someone has ranked the penis size of men from all over the world
You may also like
2 months ago
Are you looking for an insanely talented female or non-binary musician? This directory is for you
1 year ago
The new Guinness 232°C festival is almost here and we are already drooling
1 year ago
10 things we're all thinking as we wave goodbye to EP for another year
1 year ago
Three's Made By Music stage is not one to miss at Electric Picnic this weekend
1 year ago
The stage times for this year's Electric Picnic have been released
1 year ago
August festivals are underway and you can WIN the ultimate Rockshore festival kit here
Next Page