Biggie Smalls Is Due To Tour This Year - As A Hologram

The future is weird.

We are all aware of the recent developments in holographic technology which saw a very life-like Tupac Shakur performing at Coachella Festival in 2012.

According to Rolling Stone, they are not genuine holograms, but something very close to the real thing.

Eerily accurate! Spotify can guess what you were listening to 15 years ago

END_OF_DOCUMENT_TOKEN_TO_BE_REPLACED

"Ironically, in its current version, hologram technology doesn't even produce what experts consider to be genuine holograms — fully three-dimensional light-forms."

Michael Jackson is another star who has been 'resurrected' using the decidedly creepy technology.

Biggie Smalls, who was killed in 1997, is joining the list of deceased celebrities who have been brought out to 'perform' using this technology.

Billboard report that Faith Evans will be using the technology to appear in a music video 'duet' wih her late husband, real name Christopher Wallace. 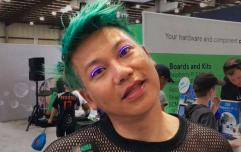 LED lashes have arrived just in time for festival season

END_OF_DOCUMENT_TOKEN_TO_BE_REPLACED

Commenting in a statement, Faith Evans said of the project, "After seeing all the technologies out there, I realized right away that ARHT Media would be the best partner to bring back Notorious B.I.G."

"This project has been a long-time coming, and it is very special to me. Words can't even capture how elated I am for the world to finally see my son again on stage and beyond.

"Christopher’s impact and legacy will not only live through his past work, but also the new experiences which have been made possible through ARHT Media.”

popular
Fleetwood Mac's Christine McVie has died aged 79
Jill Scott admits she gave Owen Warner extra food at meal time
Gwen Stefani reportedly pregnant with baby number four
Confirmed! Kylie Jenner And Jaden Smith Are Officially A Couple
The trailer for Channel 4's Vardy V Rooney: A Courtroom Drama has dropped
"Thunder Only Happens When It's Raining, Players Only Love You When They’re Playing" - 10 Of The Greatest Fleetwood Mac Song Lyrics
Revealed: The Most Dangerous (And The Safest) Places To Live In Ireland
You may also like
1 week ago
Be quick! Here are 12 of the best deals in Lidl's huge Black Friday sale...
3 months ago
WhatsApp introduces way to choose who can and can't see you're online
8 months ago
Here's why you need to change your passwords right now
11 months ago
Her Christmas gift guide: gifts to treat your bestie to this Christmas
11 months ago
You can now get £150,000 if you let a robot use your face and voice
1 year ago
WhatsApp launches privacy update today after Irish ruling
Next Page