Jedward to release new album in honour of their late mother

"We never publicly talked about the struggles or our mum's illness."

Jedward are set to release a new album in honour of their late mother.

The twins, John and Edward Grimes, announced the news this morning via their Twitter page, saying that the upcoming album, Voice of a Rebel, would be dropping this summer.

Their mother, Susannah Grimes, passed away earlier this year after a long battle with cancer.

Speaking on Loose Women today, the twins said that their mother was an "inspiration" from the very beginning of their career.

"She was such an inspiration to me and up to the point of her passing, she was still fighting," said Edward.

"She never lost who she was," John went on. "It would have been hard to go on and see her lose herself, but she never lost herself as a person."

Edward said that they haven't really talked to anybody about their mother's passing. He added that it didn't feel like they were mourning alone because "everyone is feeling for us." 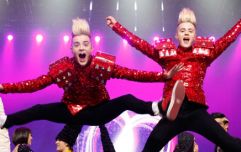 Jedward Are Planning A Eurovision Comeback... But They Won't Be Representing Ireland

END_OF_DOCUMENT_TOKEN_TO_BE_REPLACED

"It was hard because we never publicly talked about the struggles, or our mum's illness," he said. "She didn't want to show weakness."

"We haven't talked to anyone about it. It's kind of very closed doors. It's not just us mourning, it's our fans and everyone is feeling for us."

Jedward Voice of a Rebel
The New Album
Summer 2019 pic.twitter.com/sHn9scPqw9

Following their mother's passing, Jedward shared an emotive post on Instagram thanking her for her "loyalty and presence" and for being "the core to the whole family."

We will always admire you for your honesty and love. Every song we created and all the projects were from your vision and heart. Mammy you will always be our best friend and your genuine goodness will be missed."

You can watch the full interview here:

popular
This amazing hanging egg chair is coming into Aldi next week and go, go go (but safely)!
'Completely lost': Model Sarah Morrissey shares touching tribute to mother after recent passing
Richard Corrigan offering €90,000 wedding package prize for one Irish frontline healthcare worker
The Dalkey gaff where Matt Damon stayed during lockdown will be available to rent again soon
Thursday set to be the hottest day of the year, says Met Éireann
After days of silence, Scott and Sofia finally comment on the break up rumours
PSA: White Claw Hard Seltzer is launching in Ireland next month
You may also like
5 days ago
Jedward are self-isolating in LA with Tara Reid, and other things you definitely need to know today
1 year ago
Jedward share heartbreaking tribute after mum passes away following long battle with cancer
2 years ago
Jedward get a makeover and their fans are absolutely disgusted
2 years ago
Jedward post videos from the High Court... dancing to Britney Spears
2 years ago
Everyone is saying the same thing about Jedward's court picture
2 years ago
X Factor's Sean and Conor Price got advice from Jedward about show
Next Page