People love a good Disney princess movie. From Snow White to the more modern tellings of princess tales like Tangled and Frozen, they all have a special place in many people's hearts.

Many of these films are also based on foreign fairy tales, like The Little Mermaid, which is a Danish story by Hans Christian Andersen.

Disney princess movies are famous for their iconic musical numbers, and now the geniuses over at Movie Munchies have done something brilliant to link the films back to their origins that span across the globe. 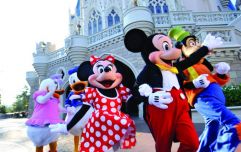 END_OF_DOCUMENT_TOKEN_TO_BE_REPLACED

You'll hear Jasmine singing in Arabic, Elsa and Anna belting their songs out in Norwegian, Mulan in Mandarin. Snow White and Rapunzel both sing German renditions of their songs.

It's supremely well done, and very interesting if you're familiar with any of the other languages used!

popular
Adam Collard responds to claims he cheated on Paige Thorne
Woman who 'fell off' rollercoaster ride is identified
Ellie Simmonds targeted by online abuse following Strictly debut
Corrie actress Lucy Fallon pregnant after miscarriage heartache
WATCH: First look at Netflix's YOU season 4
Alec and Hilaria Baldwin welcome their seventh child
Netflix's true crime series Sins of our Mother is seriously insane
You may also like
4 months ago
Pirates of the Caribbean creators not ruling out Johnny Depp's comeback despite trial
4 months ago
Zac Efron has just teased a High School Musical reboot
5 months ago
Disney's Irish Disenchanted scenes set to be reshot after mixed reviews
6 months ago
Disney is looking for a student in Ireland for a new internship
6 months ago
WATCH: Sebastian Stan on his "terrifying" new movie, Fresh
6 months ago
A new tell-all Pamela Anderson Netflix documentary is coming
Next Page