This guy just missed out on being in One Direction, returned for second chance

Do you think he'd suit the band?

Tonight's X Factor was the final round of auditions and with it came all sorts of performers from determined divas to delusional hopefuls.

But one singer who stood out from the rest was Scottish Garry Greg. 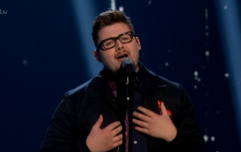 END_OF_DOCUMENT_TOKEN_TO_BE_REPLACED

The judges liked his voice and Nicole loved his Scottish accent, however they failed to address that he was almost part of the biggest boy band in the world.

The Daily Record reported that Garry was on the show in 2010, when One Direction were formed after the five boys auditioned separately.

At the time, eight contestants were chosen to stay back to potential join a new boy band and Garry was one of the three who were not selected.

“I was gutted to miss out on being in One Direction . I was devastated. They became huge and I had to take it in my stride and bounce back."

"The guys are great but it was heartbreaking watching their rise to fame knowing it could have been me.”

He said he got to know the 1D boys well during the auditions.

“I got to meet the five of them and got quite personal with them. They are nice guys.

“I was speaking away to Niall on Facebook during the 2010 show but their Facebook changed when they got big and successful and I lost touch.”

The 23-year-old returned six years later to sing Stevie Wonder's Sign Sealed Delivered to the judges and they loved him. Simon Cowell even stated "He's got a great voice.. Scotland's got soul."

He got three yeses and is through to the next round, and we're interested to see how it goes.

You can listen to his audition below.

Girls With Goals || Her · Ep.151: 'A Story Shared' - Aoife P. Rafter on blogging during a pandemic and living with CF
popular
'I feel betrayed': Curtis Pritchard on Maura Higgins and Chris Taylor's relationship
Ross was never meant to say Rachel's name at the altar, Friends writer reveals
'I loved it': The childhood drug addiction that inspired The Queen's Gambit
New ad campaign to show tampon string - despite push-back from media execs
Viewers praise Corrie for emotional scenes as Leanne's son Oliver passes away
Rachel Wyse And Galway's Joe Canning Are Reportedly Dating...
All the series and movies you need to see before they leave Netflix in December
You may also like
8 months ago
Love Island band 'No Love Lost' confirm split as Wes Nelson is 'working' on solo record
9 months ago
WATCH: Jahmene Douglas says X Factor was 'traumatising', urges singers to avoid it
1 year ago
Simon Cowell 'didn't have a clue' who the X Factor: Celebrity contestants were before filming
1 year ago
X Factor's Fleur East got married this weekend in the most stunning dress EVER
1 year ago
Simon Cowell to relaunch Celebrity X Factor in desperate bid to save ratings
1 year ago
Robbie Williams and Ayda Field have quit The X Factor after one year
Next Page