The 12 Thai boys have given their first interview since been rescued from the flooded cave.

The boys and their football coach appeared in public for the first time today at a press conference in Chiang Rai.

The children entered the cave complex on June 23 and spent about two weeks there before they were successfully rescued by a team of experienced divers.

The boys said that they didn't have anything to eat in the cave before the divers found them, but that they did drink clean water from the stalactites. 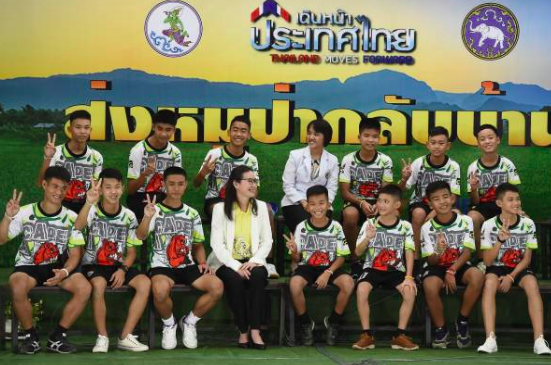 While trapped in the cave, the boys took turns digging at the walls and the ground searching for a means of escape and to get further away from the rising water.

"We took turns digging at the cave walls. We didn't want to wait around until authorities found us."

The boys were found alive in the cave after being trapped alone for nine days.

Another member of the team, Adul Sam-on, said that when they realised they had been found by the divers, it was "magical."

Video by @CNN’s @patrick_bkk of the #WildBoar boys emerging from hospital in Chiang Rai #ThamLuang pic.twitter.com/ivS0AXeKQu

"I had to think a lot before I could answer their questions," he said. "It was in the evening when we were scratching rocks on the top of the boulder and we heard voices."

The boys also confirmed that contrary to early media reports, all of the team members were able to swim.

The 12 boys and their coach were released from hospital today and will now be permitted to return home.

They are all said to be in good physical and mental health.

popular
Four counties to be “looked at very carefully” ahead of possible move to Level 3 restrictions
James Franco Has Opened Up About His Relationship With Lana Del Rey
Someone has ranked the penis size of men from all over the world
Kate Middleton has addressed the rumours that she's pregnant with her fourth child
All of the Love Island couples that are still together (and those that aren't)
Here's what happens on every day of your menstrual cycle (roughly)
Here's the average age people lose their virginity around the world
You may also like
16 hours ago
What's going on with TikTok?
19 hours ago
"Tip of the iceberg:" Irish charities team up to tackle devastation of Covid-19 in vulnerable communities abroad
5 days ago
At least 380 whales die in mass stranding off Australian coast
6 days ago
Jackie Stallone: Celebrity Big Brother star and Sly's mother dies aged 98
1 week ago
"I was petrified and wanted a hand to hold:" Irish women call for the ease of maternity restrictions
1 week ago
Micheál Martin says "more influencers" needed to reach young people about Covid dangers
Next Page