Veganism is a philosophical and religious belief according to a UK court and is therefore protected by law.

The employment tribunal that began on Thursday has today ruled that veganism is indeed a philosophical and religious belief, receiving protection under The Equality Act 2010.

This means ethical vegans (people who choose to eat a plant-based diet but who also avoid leather, wool and products tested on animals or that exploit animals) will receive protections from discrimination.

The ruling comes after 'ethical vegan,' Jordi Casamitjana said he was dismissed from his job at the League Against Cruel Sports due to his philosophical beliefs. 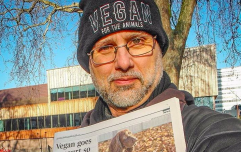 END_OF_DOCUMENT_TOKEN_TO_BE_REPLACED

The charity maintains Mr Casamitjana was dismissed due to 'gross misconduct.'

Mr Casamitjana, 55, realised the animal charity's pension fund was being invested in companies that were testing on animals and believes he was dismissed because he made his colleagues aware of this. The League Against Cruel Sports says the former employee's beliefs were not the reason for his dismissal.

During the landmark case in Norwich, Judge Robin Postle ruled that ethical veganism satisfies the tests laid out to fall under The Equality Act 2010, giving veganism the same protections as religion in the UK. According to Sky News, the judge said veganism was "important" and "worthy" of respect in a democratic society.

This hearing was separate to the hearing that will take place in the near future over the reasons for Mr Casamitjana's dismissal. The hearing this week does, however, rule that veganism is a protected belief in the UK.

popular
Someone has ranked the penis size of men from all over the world
'They're Dead To Me Now' - Kate And Oliver Hudson Have Been Disowned By Their Father
The Queen has banned Meghan Markle from wearing any of Princess Diana's jewellery
Ryan Reynolds has shared the inspiration behind his daughter James' name
WATCH: Paul Mescal and Daisy Edgar Jones's first Normal People audition is stunning
Trolls target Emma Willis' eight-year-old son over pink clothes and long hair
If you constantly have a cold nose, this could be the reason why
You may also like
11 months ago
World Vegan Day: can you really get all of your nutrients on a plant-based diet?
1 year ago
9 thoughts that I had when I went vegan for a week
1 year ago
Six things people will ask you when you go vegan
1 year ago
'Barbecue dog' stunt horrifies meat eaters, vegetarians, and vegans alike
1 year ago
Wait - going vegan could have an unexpected negative effect on your skin
2 years ago
Vegan Magnum ice creams exist, and they actually look delicious
Next Page