The small Swiss-registered plane crashed near a Lidl supermarket in Tires just outside Lisbon.

The plane had reportedly been en route to Marseilles when it crashed shortly after taking off from a local airfield.

According to Portuguese media, the Swiss pilot and 3 French passengers onboard were killed as well as a truck driver who was caught up in the collision. 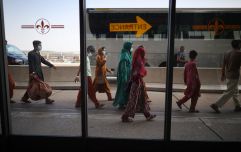 END_OF_DOCUMENT_TOKEN_TO_BE_REPLACED

The cargo bay is located about 2 kilometers from the runway of the aerodrome where the plane took off from.

The cause of the crash is still unknown and investigations are underway.

popular
Emmerdale actors Max Parker and Kris Mochrie announce engagement
"Hair contouring" is about to be huge, here's everything you need to know
Woman hospitalised following stag attack in Co. Kerry
FBI reveal that Brian Laundrie is responsible for Gabby Petito's death as they discover notebook
A clip has resurfaced of Machine Gun Kelly discussing a teenage Kendall Jenner
Seems sudden? This is why the restrictions have completely lifted this soon
People are only realising Kendall Jenner and Gigi Hadid are related and the reactions are gas
You may also like
3 weeks ago
Father and two sons die in fire caused by Christmas tree
1 month ago
"I'll never get over it": Mum who lost her four sons in London house fire speaks out
1 month ago
Two babies survive after Kentucky tornado lifted them away in bath
1 month ago
Sixth child dies following bouncy castle tragedy in Australia
1 month ago
Four young children tragically killed in house fire in London
1 month ago
Star Hobson's great-grandfather calls killer Savannah Brockhill "pure evil"
Next Page