A man has been killed in a crash in Co. Louth

The incident happened in the area of Carstown last night.

Two men were injured in a car collision with one losing his life in Co. Louth.

According to The Irish Mirror, the accident happened at 10.3opm on the 16th September in Carstown, Termonfeckin. 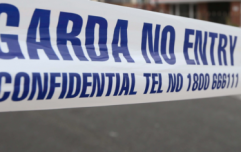 Human remains found in Dublin are those of missing Louth teenager, Keane Mulready-Woods

END_OF_DOCUMENT_TOKEN_TO_BE_REPLACED

It's reported that the man driving the car in the single-vehicle crash was in his 20s, while the passenger in the car is in his late teens.

The passenger was brought to Our Lady of Lourdes Hospital where it's believed his injuries have not been deemed as critical.

Gardaí have closed the road affected by the crash to examine the scene for forensic evidence.

popular
Women are rinsing their hair in apple cider vinegar – and the results are amazing
Britain’s biggest family to break new record with another baby on the way
Government to publish bill on right to request remote work option
"Hair contouring" is about to be huge, here's everything you need to know
Gardaí investigating alleged sexual assaults on teenage girls in Sligo
Scottish dance sensation Lily Douglas has sadly passed away, aged 14
Worried about a loved one? Here are 5 signs of suicide to look out for
You may also like
2 years ago
Drogheda's Fleadh Cheoil and the town's AMAZING surroundings have so much to offer
2 years ago
14-year-old girl dies after getting into difficulty swimming in Louth
2 years ago
Body found in Carlingford Lough following search for missing woman
2 years ago
Lucky player from Louth scoops a massive €2.5 million on last night’s Lotto draw
3 years ago
Friends of woman brutally murdered in Louth home want to 'bring her home'
3 years ago
Man charged with murder of his mother, Elzbieta Piotrowska, in Co Louth
Next Page