A woman gave birth to a baby boy at 1,400 feet in a helicopter

This is an incredible story!

A mother gave birth to her son 1,400 feet up in the air last weekend.

Alicia MacDonald went into labour on Saturday while she was visiting the Isles of Scilly just off the Cornish coast. She was there to officiate her friend's wedding ceremony. 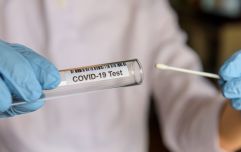 Omicron variant symptoms are mild so far, says doctor who discovered it

END_OF_DOCUMENT_TOKEN_TO_BE_REPLACED

There was no midwife on the island at the time so the expectant mum had no choice but to get in touch with the Coastguard.

The South West Ambulance Service collected Alicia and her husband, and flew them back to the Royal Cornwall Hospital in Truro.

But, their newborn couldn't wait until they were back on the ground.

Tooran MacDonald arrived at 8:53pm with the help of midwife Linda Benson. He weighed 7lb 8oz.

A safe arrival for baby Torran who arrived mid-flight from the Isles of Scilly this weekend. Mum and dad send their thanks to midwife Linda Benson (left) and the helicopter crew at @MCA_media Newquay. pic.twitter.com/tekGSTkQLo

Since giving birth, Alicia has thanked everyone who helped her family out. According to The Guardian, she said:

"Torran is doing fine and we’d like to thank the coastguard, the midwife and the midwifery team at the hospital."

"This is the second time that a baby has been born on board a Coastguard helicopter."

"The last one was born over Lunna Holm, Shetland in December 2012."

"It’s rare to hear that our helicopter launched with seven people on board but were preparing to land with eight."

popular
The internet is saying the same thing after Ryan's Toy Show opening
Vicky Phelan says terminally ill people should have right to decide how to die
You can rent out the house from House of Gucci on Airbnb
The best memes from this year's Late Late Toy Show
Strictly's Giovanni Pernice responds to dating rumours following split from Maura Higgins
What is the 'yassify' trend and why is everyone doing it?
Omicron variant symptoms are mild so far, says doctor who discovered it
You may also like
3 weeks ago
Elaine Crowley heartbroken after mum passes away
1 month ago
21-year-old mum says people don't believe twin daughters are hers
1 year ago
CEO says corporations need to stop turning away mums with gaps on CV
1 year ago
Two's company: WIN two €150 Oscar Graves jewellery vouchers for yourself and someone special
2 years ago
Why you should always take your mum to a house viewing
2 years ago
WIN an afternoon tea for two to treat your mum this Mother's Day
Next Page