The Northern Ireland Ambulance Service last night declared a “major incident” in Belfast, after around 40 young people who were attending a concert became ill.

It is believed that many of the young people were suffering from the effects of alcohol and drugs.

RTÉ reports that nine people were taken to hospital, though it’s said that none of them are in a serious condition. 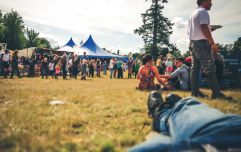 END_OF_DOCUMENT_TOKEN_TO_BE_REPLACED

The concert-goers were at a gig at Belfast’s Odyssey Arena that was headlined by DJ Hardwell.

“It is our understanding that a number of patrons arriving to attend a concert by Dutch DJ act Hardwell have required medical attention, having already been intoxicated on their arrival at the complex” said Adrian Doyle, a spokesman for the Odyssey Arena.

“These patrons were not granted entry to the Odyssey Arena, and were treated by the Ambulance Service outside.”

popular
Lidl closing early this weekend to thank staff for hard work
Simon Harris gives three urgent options for easing restrictions next week
Unusual summer temperatures are on their way this weekend
Tributes paid to Limerick based blogger and model Patrick McLoughney
The First Quadrillionaire? Paypal Accidentally Gives Man $92 Quadrillion
Woman Hits Out After Being Called 'Ugliest Bride Ever' On Her Wedding Photographer's Facebook Page
Squid Game fans spot massive clue in Tug of War game
You may also like
3 weeks ago
Garth Brooks gives an update on those Croke Park rumours
1 month ago
Garth Brooks will try play 5 nights at Croke Park - again
3 months ago
Elton John will play huge Cork gig during final tour
3 months ago
Opinion: Why is there so much negativity surrounding the pilot festival?
3 months ago
Rapid antigen testing will be required for IMMA pilot gig next month
5 months ago
Bon Jovi concert to be live-streamed at three drive-in venues across Ireland
Next Page