After bring knocked out of Wimbledon at the quarter-final stage, Andy Murray was forced to go through the post-match interview with reporters just moments after his devastating loss to US player, Sam Querrey.

However, his personal disappointment didn’t prevent him from standing up for his female counterparts.

Yes, when one reporter questioned Andy about the success of Sam Querrey, the Scottish champ was quick to point out he wasn’t the first.

Andy Murray stops a reporter's question to remind him there are female tennis players too. pic.twitter.com/MBTXHnrr0E

Is Andy Murray the most doggedly feminist *male* player in tennis? This seems to happen every year, but he's always ready to call shit out. https://t.co/fQqKMYC4W4 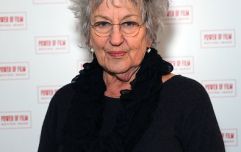 END_OF_DOCUMENT_TOKEN_TO_BE_REPLACED

Of course, Sam is not the first American player to reach a major semi-final since 2009, Serena Williams has done that many times since then, as well as Madison Keys, Coco Vandeweghe, Sloane Stephens and Venus Williams who did so the day before Andy's press conference.

And this isn’t the first time he has had to remind the sports media about female tennis star's achievements.

Last year, the 30-year-old quickly corrected another reporter who claimed he was the first person to win two gold medals in tennis at the Olympics - an accolade that both Serena and Venus Williams have won four times each.

Say what you will about Murray but so rare is the male athlete whose brain is so automatically programmed to credit accomplishments of women https://t.co/R29XBCGeEl

popular
Vogue Williams slams man who refused to swap seats with her on plane
Christine Quinn won't be returning to Selling Sunset
This is why the world is obsessing over Adidas Gazelles
Are we getting a mini heatwave in September?
Phoebe Bridgers and Paul Mescal go sale agreed on West Cork home
10 must-have summer essentials that are perfect for your next sun holiday
Crown Paints advert receives 200 complaints over 'misogyny' and 'everyday sexism'
You may also like
5 months ago
Opinion: Fourth wave feminism, what's needed now?
9 months ago
Saoirse Ronan to produce upcoming feminist series, Girls Can't Shoot (& Other Lies)
3 years ago
'I am doing my best to be better': Seven affirmations for International Women’s Day
3 years ago
Bryan Cranston proves he's the ultimate feminist in supportive Instagram post
3 years ago
'Santa Baby' is the latest Christmas song to come under criticism as Miley Cyrus changes lyrics
3 years ago
'How dare you NOT call yourself a feminist?' - It Galz share their views on labels
Next Page