Apple have addressed our biggest concern about the wireless headphone situation

That was the slightly wiffy explanation Apple gave for removing the headphone jack from the new iPhone.

In its place, Apple users will now have one of three options if they want to listen to music on their €799 smartphone.

There's a Lightning-compatible pair of EarPods that come included with the phone, as well as a slightly counter-intuitive free dongle to connect old, analog headphones to the device

But real, Charlie Bananas option for iPhone users is to opt for a pair of wireless Bluetooth headphone buds dubbed AirPods.

You'd have to be sodding courageous to don Airpods, such is the risk of losing the $159 device.

Those new AirPods had better help you record & produce your own single for that price. #AppleEvent pic.twitter.com/haR54qreBJ 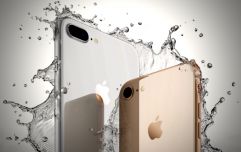 END_OF_DOCUMENT_TOKEN_TO_BE_REPLACED

But in a... philanthropic move, Apple have shown they understand that AirPods could be easy to lose, so they're offering to sell individual replacements "through normal service channels".

As Mashable reports, if you find yourself losing one of the pods, you can pick another one up... for a price.

How much? Well we're not sure yet.

Mashable have done the maths though and reckon...

popular
Paul Mescal wore O'Neill's shorts while carrying cans of pink gin so I bought O'Neill's shorts and cans of pink gin
This amazing hanging egg chair is coming into Aldi next week and go, go go (but safely)!
After days of silence, Scott and Sofia finally comment on the break up rumours
Patrick Dempsey Denies He Was Fired From Grey's Anatomy For Having An Affair With Intern
PSA: the original Buffy the Vampire Slayer is returning to the television
5 reasons why we need more videos of Doireann Garrihy's new puppy immediately
Gwen Stefani reportedly pregnant with baby number four
You may also like
6 months ago
Here's how to stop your phone from always saying 'duck' and 'ducking'
6 months ago
Apple have introduced period and disability emojis in their latest update
8 months ago
These are all the mistakes we're making when charging our phones
9 months ago
This is how you can scan documents onto your iPhone
1 year ago
This is what your most used emoji says about you
1 year ago
Have an iPhone, yeah? Turns out you're a 'rich' person
Next Page