Did you get caught by this?

You probably see several Facebook competitions on your timeline every day. Pages which seem like they are legitimate well known companies will claim they are giving away just about anything, from vouchers to holidays to jewellery.

More often than not these competitions are fake, with a prime example being the latest offer, which appeared to be from Audi.

The fake post featured the usual 'all you have to do' guidelines and claimed someone would win a car worth a lot of money. 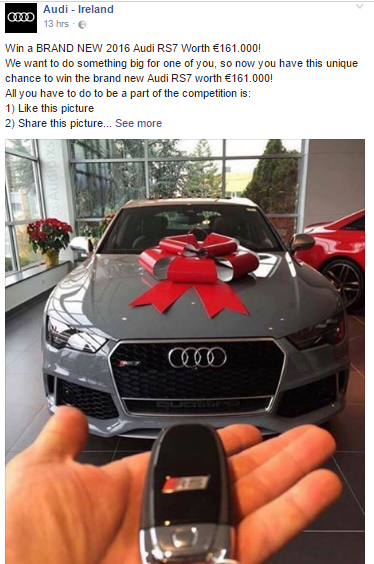 ''The fake post states: "Win a BRAND NEW 2016 Audi RS7 Worth €161.000!
We want to do something big for one of you, so now you have this unique chance to win the brand new Audi RS7 worth €161.000!
All you have to do to be a part of the competition is:
1) Like this picture
2) Share this picture
3) Write “AUDI” in the comment section or tag two friends who
you think should join as well!
We will find the lucky winner the 10th. of January!
Maybe it’s you?'' The post said.

Audi's official Facebook page released a statement to clarify that it is a fake competition.

Don't worry though, as there's not real harm if you have already shared the competition (other than a little embarrassment maybe and the fact that now you definitely know you won't win).

popular
These 14 Dublin attractions are opening their doors again next week
Doctors warning young people against 'sun cream contouring' TikTok trend
A Full Time Job - The List of Tasks Mothers Carry Out Every Day
Louise Redknapp just admitted a shocking truth about her ex husband, Jamie Redknapp
Here's what happens on every day of your menstrual cycle (roughly)
Someone has ranked the penis size of men from all over the world
"Our best friend and loyal companion" – Barack and Michelle Obama's dog, Bo, has died
You may also like
1 year ago
First-time buyers, start your engines! Begin your house-buying journey at this movie and mortgage night
2 years ago
A premium car without the price tag? The car of our dreams has just arrived
3 years ago
This is the most popular car colour in Ireland... and we're not surprised
3 years ago
A man is selling the world's most expensive number plate for €17 million
3 years ago
Why you'll never put your feet on the dashboard of a moving car again...
3 years ago
Time to hit the road! 4 incredible day-trips to make in Ireland right now
Next Page