Bernie Sanders drops out of 2020 US presidential race

The stage is set for Trump v Biden...

Bernie Sanders has dropped out of the 2020 US presidential race, setting up a general election between President Donald Trump and former Vice President Joe Biden.

The 78-year-old senator from Vermont initially performed strongly in the first three states that voted in February.

However, the tide turned when Joe Biden won a blowout victory in South Carolina on the last day of February as conceding centrists threw their support behind Biden and prominent Democrats coalesced around the former Vice President. 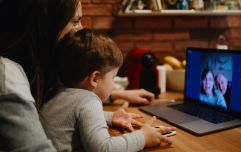 END_OF_DOCUMENT_TOKEN_TO_BE_REPLACED

With the current public health emergency in the US, Sanders was reduced to delivering addresses via video streams and making occasional TV appearances, all the while pressure increased on him within the Democratic Party to withdraw and unite the party behind Biden.

Sanders spoke to his supporters via a video conference on Wednesday following his withdrawal saying that despite the campaign ending, the struggle for justice will continue.

popular
Gwen Stefani reportedly pregnant with baby number four
Remember Christian From Clueless? This Is What He Looks Like Now
After days of silence, Scott and Sofia finally comment on the break up rumours
Someone has ranked the penis size of men from all over the world
These sustainable Irish sweaters are making people smile, and they're back in stock tonight!
From blonde to brunette - 6 things I wish I knew before going back to my roots
So, William and Harry have a step sister... and who knew?
You may also like
4 weeks ago
Banksy donates artwork honouring healthcare workers to hospital
2 months ago
#Covid-19: Six-week-old baby dies after testing positive for coronavirus
2 months ago
You need to watch this Sky News report on Italy's Covid-19 emergency
2 months ago
The US extend the European travel restrictions to include Ireland and the UK
2 months ago
A newborn baby in London has tested positive for coronavirus
2 months ago
Spain declares state of emergency over coronavirus
Next Page