No professional equipment is needed, all you'll need to do is look up.

What NASA is describing as the "best meteor shower of the year" is set to be visible from Ireland tonight.

A Perseid Shower will take place, which many consider one of the highlights of the astronomy calendar.

Many expect that it is possible that you will see a meteor, or a shooting star, streaking across the sky every few minutes on Tuesday night (11 August).

Astronomy Ireland is calling on people to observe the event tonight, highlighting that no professional equipment is needed. All you have to do is wait for it to be dark and then look up.

Astronomy Ireland said: "As Earth moves through this cloud, the particles fall into our atmosphere and burn up, creating spectacular streaks of light in the sky, known as meteors or shooting stars. 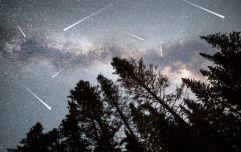 The best meteor shower of 2018 takes place over Ireland tonight

END_OF_DOCUMENT_TOKEN_TO_BE_REPLACED

"If you trace back the path of a Perseid, you will find that it appears to come from a point in the north east, maybe halfway between the horizon and the zenith (the point straight above your head)."

The type of meteors that may be visible on Tuesday are also known as 'fireballs', with NASA saying: "Fireballs are larger explosions of light and color that can persist longer than an average meteor streak."

Some great excitement of a Tuesday night.

popular
Aldi is selling a €20 coffee machine that's designed to "Brew and Go"
Yellow rainfall weather warning issued for seven counties
A new €1.3 million stargazing experience opens in Co. Tyrone next month
'Beard-baiting' is now apparently a dating trend - and we're all for it
Someone has ranked the penis size of men from all over the world
Here's what happens on every day of your menstrual cycle (roughly)
Why Are Men so Obsessed With Boobs? The Answer is Pretty Surprising...
You may also like
5 years ago
Having Some Trouble with Your Phone Today? This Might Be Why
5 years ago
Dazzling Meteor Shower to Light Up the Skies This Week
1 week ago
Netflix's Cheer star Jerry Harris arrested on child sex images charge
1 week ago
Covid-19: Dublin likely to move to Level 3 restrictions before this weekend
1 week ago
Sweden, Germany and others to be added to travel "Green List"
1 week ago
Living with Covid: Here's what levels 1-5 mean for social gatherings, wet pubs, and weddings
Next Page