There's been a spate of attacks on delivery drivers across the capital.

Food delivery company Deliveroo are hoping to meet with An Garda Síochána after a spate of attacks on its workers around Dublin. Deliveroo riders are claiming they're coming under increased threat of attack around Dublin City Centre, particularly from groups of young people attempting to steal their bikes at knifepoint.

The cyclists say they feel "unsafe" and are urging Gardaí to take action. Speaking on Today with Claire Byrne on RTÉ Radio 1, William and Lucas, from Sao Paulo in Brazil, explained how dire the situation has become on the streets of Dublin;"We are facing too many attacks from teenagers. They try stealing our bicycles and hit you with some things and we don't know why it happens because we are just working." 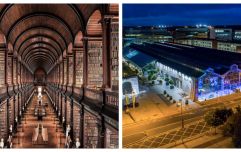 END_OF_DOCUMENT_TOKEN_TO_BE_REPLACED

William went on to describe a recent attack he had endured, "Three weeks ago I was delivering in Dublin 8 and fifteen to twenty guys tried to stop my bike. They tried to throw some chain lock to stop my bike but they couldn't. I was very, very, very nervous... I could escape but I have some friends and they couldn't and they lost their bikes."

Deliveroo riders predominantly deliver takeaways from restaurants across the capital and speaking to reporter Barry Lenihan, they explained that they are frequently faced with violence and had objects thrown at them including "rocks, eggs, bottles and fireworks."

Over the last year there has been several violent incidents reported to Gardaí, but the riders explained that there has been an increased level of animosity in the last few weeks and there are parts of Dublin that they no longer deliver to as a result, "We are afraid, how can we work with this level of violence on the street."

Gardaí told the program that they'e carrying out increased patrols across the capital due to these recent tensions and are urging Deliveroo riders to report any incidents or thefts to their local station.

Girls With Goals || Her · Ep.161: Feeling Peachy - Sharon Keegan of Peachylean on being an absolute BOSS!
popular
Aldi is selling a 2in1 grill and fire pit just in time for summer
Someone has ranked the penis size of men from all over the world
Naomi Campbell welcomes baby girl
Aldi is selling outdoor string rattan chairs for €30
Chris Watts in protective custody in prison over "danger" of other inmates
Cork school may need to close due to "serious" Covid outbreak
Pink just announced she was pregnant in gorgeous image
You may also like
1 month ago
Dublin drive-in cinema re-opening this month with stellar selection of movies
2 months ago
Woman arrested after multiple Garda cars chase vehicle from Ballymun to Wicklow and back
2 months ago
Teenager seriously injured in Dublin shooting
3 months ago
Central Bank to become the new headquarters for Pokemon
3 months ago
Teenage boy stabbed to death in Dublin
5 months ago
3 Dublin Christmas markets we're dying to check out this weekend
Next Page