This is an insult to sportswomen across the country.

The Senior Women's National football team have held a press conference in Dublin today, highlighting their unfair treatment at the hands of the FAI.

From sharing apparel to missing out on bonus fees, the elite athletes who represent our nation face a constant uphill battle.

Not only are they forced to miss work days (many of them are non-professional) they are also forced to share kit with junior teams and any match fees for international fixtures are a pipe dream.

The team released a collective statement before the press conference: 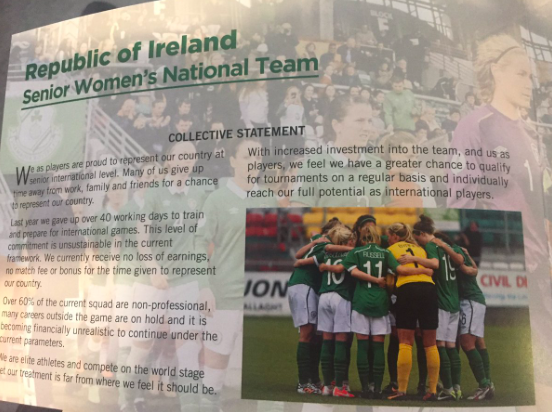 Republic of Ireland correspondent with UEFA Maria Crowe was at the event this morning and she's been live-tweeting:

Stephanie Roche explaining what it's like not to be able to keep their tracksuits, changing in airport toilets

Stuart Gilhooly "we need to recognise that the women's team are 5th class citizens, the dirt on the FAI's shoe"

The WNT have to share their tracksuits with underage teams

Both the FAI and the WNT want the team to be successful they need to work out ways to do that, pity it has to come to this #IRLWNT

The outpouring of support today on the back of the press conference has been major:

This is #irlwnt Saipan moment. All the team are united to win better conditions and are fighting for the future of women's football #COYGIG pic.twitter.com/X3ISCHV3Zb

This is the list of BASIC ISSUES that #IRLWNT want their governing body to address. Read them, share them, and get angry about them... ✊? pic.twitter.com/AVIH1OgwHz

Emma Byrne: "we are fighting for the future of women's football" #IRLWNT

In a statement, the Football Association of Ireland said it was deeply disappointed that members of the Republic of Ireland Women’s National Team "have threatened to withdraw from playing for their country in the upcoming match versus Slovakia on April 10, 2017."

"The ultimatum by the players concerned comes in spite of repeated invitations from the FAI to the Players to discuss clear and tangible financial offers for the payment and compensation of members of the squad.

Repeated efforts by the Association have been made in a bid to encourage the players to row back from their unprecedented ultimatum."

The FAI claims it has attempted to bring the players to the table, "only to have the offer rebuked at every turn" on five occasions.

We doubt anyone in this country would ask the men's National team to change in the jacks and return their kit... why is it different for women?


popular
The comfy €42 M&S boots we're going to be living in all spring
Le Creuset has launched a millennial pink collection, and we need it all tbh
The floral Penneys dress that will instantly update your spring wardrobe
No chemical peel needed: 7 easy ways to achieve the glowing skin of your dreams
Why you shouldn't put your address on your luggage when going on holiday
Netflix's Babies documentary is making quite the impression online
Summer is coming, and we'll be living in these adorable €11 denim shorts from Penneys
You may also like
1 week ago
Why the youth vote shouldn't be dismissed as snowflake politics
2 weeks ago
Met Éireann issue snow/ice weather warning for whole of Ireland
2 weeks ago
Saturday's winning €2.7 million lotto jackpot ticket sold in Carlow
2 weeks ago
Vote counts begin across the country following extraordinary exit poll
2 weeks ago
#GE2020: Four first time female candidates on why they're running for the Dáil
2 weeks ago
#GE2020: Meet the Irish MUA who has turned her platform to politics
Next Page