Police in the Thames Valley have given a driver penalty points and a fine because their car was so dirty that that "it was dangerous" to drive on the roads.

END_OF_DOCUMENT_TOKEN_TO_BE_REPLACED

The following motorist was stopped while driving in Marlow, south Buckinghamshire.

Their official Twitter account said that: "A tidy cab = A tidy mind This was so bad it was dangerous, rubbish under floor pedals. Points on licence and fine. Driver was arrested for an unconnected matter."

Here's an image of the car and the police statement. 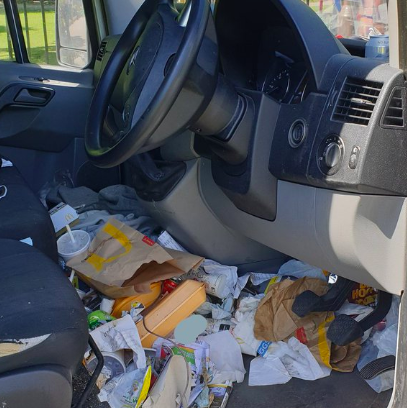 popular
Love Island’s Afia explains why Gemma’s dad has not been mentioned on show
Love Island fans concerned over "bullying" of Ekin-Su
Two dumped islanders have confessed their feelings for each other since leaving the villa
PSA: Casa Amor is happening - and soon
Love Island fans are in shock after new boy Charlie revealed his age
Shaughna Phillips brands Love Island heart rate challenge "fixed" and "vile"
Ryan Tubridy has heartwarming reunion with Toy Show star Saoirse Ruane
You may also like
1 week ago
UK lined up to host Eurovision 2023 after organisers rule out Ukraine show
1 week ago
Double-decker aeroplane seats could become a thing soon, unfortunately
1 week ago
Joker 2: Lady Gaga reportedly in talks to play Harley Quinn in sequel
1 week ago
Flexible working, child sick days – the proposed Work Life Balance Bill is a game-changer
2 weeks ago
Harry and Meghan release brand new picture of Lilibet to mark 1st birthday
3 weeks ago
Amber Heard says Johnny Depp trial verdict is a 'setback' for women
Next Page