Dublin Fire Brigade has issued a warning about fires breaking out in power showers.

Engines from Kilbarrack and North Strand had to attend an incident yesterday where a power shower caught fire after being left on at the isolation switch.

DFB shared a photo of the scene which included a destroyed power shower and smoke-covered bathroom tiles.

Damage to the bathroom was minimised thanks to the house's owners who closed the shower door.

Electric shower at home? Always turn off power to the shower at the isolation switch when finished. We had fire engines from Kilbarrack and North Strand at this shower fire earlier. The owners closed the doors on the fire which limited damage to the bathroom pic.twitter.com/cklrIbcN3o

DFB urged people to turn off their isolation switches when finished using their power showers.

This comes after a warning was issued about leaving aerosol cans and mirrors near windows during the heatwave.

The brigade asked everyone to make sure they don't leave any mirrors, crystal, or glasses on windowsills because they could shatter if the sun reflects onto a flammable surface. 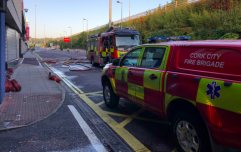 END_OF_DOCUMENT_TOKEN_TO_BE_REPLACED

They also warned that aerosol cans can explode too, and shared a video of a fire caused by a vanity mirror that was left on a windowsill.

DFB said that all such items should be left in the shade at all times and that people should be mindful that the sun moves during the day.

Girls With Goals || Her · Ep.161: Feeling Peachy - Sharon Keegan of Peachylean on being an absolute BOSS!
popular
Harry Styles accepts BRIT for Best British Single - with American accent
Woman buys 148 year old house, goes viral after finding secret passage way
Nine-year-old boy dies after being struck by lightning in UK
Is that Seth Rogen without a beard?
9 Dublin restaurants with outdoor dining we've already booked a table for
Penneys issues statement after shoppers try to sell appointments for €100
The reviews on Brooklyn Beckham's book are absolutely gas
You may also like
1 year ago
Attention BBQ lovers: WIN two tickets to the Big Grill to give your taste buds a treat
1 year ago
A hundred firefighters are battling a massive fire at block of flats in east London
1 year ago
Guinness X Meatopia is BACK! Expect tastings, workshops and an insane lineup
2 years ago
'850 years of history taken down in 5 minutes': Outpouring of emotion as Notre Dame spire collapses
2 years ago
Festival-goers told to run as fire breaks out at Coachella overnight
2 years ago
Seven children from one family killed in house fire in Canada
Next Page