Also, massive respect to the person who took a taxi from Dublin's Shelbourne Hotel to Grafton Street.

With 2019 drawing to a close, it's very likely that people around the country will be doing a mad-dash scramble to get home for Christmas.

Yep, it's going to be like Home Alone meets Planes, Trains and Automobiles over the coming weeks but there are always some folk that will be working right through the festive season.

Heroes, one and all.

The coming weeks are incredibly busy for taxi drivers across the county and Lynk - Dublin’s taxi booking app -  have released some of their most entertaining and interesting stats for 2019, including the highest fare and most unusual items left behind by passengers.

€751 was the highest fare for a Lynk taxi passenger in 2019. The hefty tab involved a lengthy trip from Dublin to Westport and back after a business passenger needed to get to an important meeting.

In comparison, the shortest trip taken was from the Shelbourne Hotel to Grafton Street. Yikes! You can legitimately see Grafton Street when standing outside of the hotel. A mere stone's throw away. We're sure the passenger had their reasons.

Lynk also revealed that the most popular booking time for the service was 8am and shed some light on what was left behind in their taxis in 2019.

Wowburger are opening new premises and DCU students will be thrilled!

END_OF_DOCUMENT_TOKEN_TO_BE_REPLACED

While common items showing up in the Lynk lost and found included phones (32%), wallets or bags (22%) and shopping (13%), one unfortunate bride-to-be left her wedding dress behind, having forgotten it was in the boot.

In terms of other strange requests, meanwhile, one woman asked a taxi driver to transport her budgie from Dublin to Brussels because no airline would allow her to travel with it.

Unfortunately, 122 passengers jumped out the car before paying their fare, while another 57 passengers got sick in the vehicle.

Here's an infographic which explains some of the more interesting information that the company dealt with in 2019. 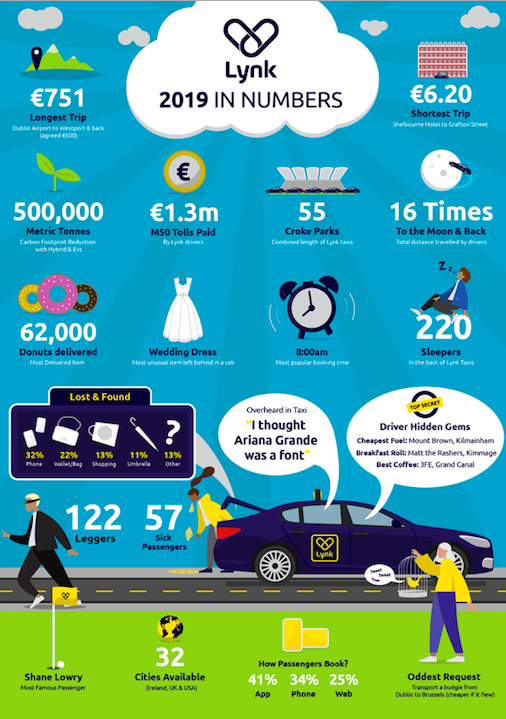 popular
5 Netflix releases to keep an eye out for in October
There's a Friends makeup collection coming, featuring Phoebe, Monica, and Rachel palettes
Paul Mescal didn't win an Emmy and that's okay
QUIZ: How well do you remember the first episode of Gilmore Girls?
The sentimental engagement ring trend you're going to see a lot of for the rest of this year
Someone has ranked the penis size of men from all over the world
Selling Sunset's Chrishell Stause reveals "the brokerage has split"
You may also like
1 week ago
Two Irish spots named among the best pizzerias in Europe
2 weeks ago
Dublin’s first cocktail village has opened in Roe & Co Distillery. See you there?
1 month ago
3 lovely spots you can get yourself a boujie lunch in Dublin
2 months ago
DIG IN, the world's first 'Art Diner' has just opened on Dublin's Camden Street and it looks fab
2 months ago
Know someone from Dublin who is living abroad? They might need this candle
3 months ago
Thank god for Dublin's new public toilets
Next Page