Taoiseach Enda Kenny has won a lot of praise internationally for how he subtly but firmly rebuked Donald Trump's immigration policies during this year's Paddy's Day trip to Washington DC.

However, it had been widely accepted that Kenny was preparing to step down as Taoiseach soon after his trip to visit the new President.

Now that Enda Kenny is in a strong moment, and the furore over the Maurice McCabe scandal has begun to subside, it seems that Kenny might not be so ready to relinquish his office after all. 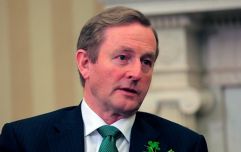 END_OF_DOCUMENT_TOKEN_TO_BE_REPLACED

Minister of State for European Affairs Dara Murphy echoed this view, saying: “Given Enda Kenny’s experience and the fact that he is the one who has led the political negotiations, it is absolutely vital that the same team stays in place, especially the leader of the team."

It seems that this line of thinking has been rebuffed by those supporting Leo Varadkar as the next leader of the party, one of which reportedly said that the incumbent Taoiseach's departure would have nothing to do with the EU.

Ladbrokes currently has Leo Varadkar in a dead heat as the most likely TD to replace Kenny at 10/11, on the same odds as Simon Coveney. Frances Fitzgerald is the next most likely after that, but she is way behind with odds of 16/1.

This article first appeared on JOE.ie

Girls With Goals || Her · Ep.155: 'Bits of Me' - Linnea Dunne on the importance of women's health
popular
Two elderly men found dead as Gardaí "urgently" search for red van in Cork
Scarlett Moffatt discovers ‘30% rain’ on weather app doesn’t mean chance of rain
Anne Hegarty shook by "worst ever" final Chase
Princess Anne: Harry and Meghan were right to quit royal duties
Met Éireann predicts dry, bright, and sunny weekend
Lady Gaga's dog walker shot as her two dogs are stolen
Jesy Nelson "mentally bullied" herself during Little Mix years
You may also like
2 years ago
7 things that definitely went through Enda Kenny's head when he met Meghan Markle
3 years ago
The Canadian Prime Minister wore the BEST socks to meet Enda Kenny
3 years ago
People made the same joke about Enda after the UK's announcement
3 years ago
Pamela Anderson has asked Enda Kenny for a pint but on one condition
3 years ago
Taoiseach heads straight for Washington as Storm Stella hits America
3 years ago
Referendum to be held on granting voting rights to Irish people living abroad
Next Page