We all love a true crime series, and nowhere does it better than Netflix, and we have everything you need to know about the latest series.

I Just Killed My Dad is heading to the streaming service next week and depicts the story of 17-year-old Anthony Templet murdering his father Burt in Louisiana in 2019.

Anthony shot his dad twice on June 3rd, and quickly called 911 to report the shooting, but identified himself as the shooter.

END_OF_DOCUMENT_TOKEN_TO_BE_REPLACED

Telling the chilling story in a three-part docuseries, the show is directed by the same director as Girl in the Picture.

Looking into the Templet family's history and background, with allegations of abuse, kidnapping and surveillance and seeing what led to Anthony killing his father.

END_OF_DOCUMENT_TOKEN_TO_BE_REPLACED

Netflix teased: “Anthony Templet shot his father and never denied it. But why he did is a complex question with profound implications that go far beyond one family.

"This three-episode documentary series explores the psyche of Anthony leading up to the events of June 3, 2019 and the journey of his mental and emotional aftermath.”

The story doesn't look at who did it, but rather the why of the crime and what led Anthony to make such a drastic decision.

The shooting occurred after an argument between father and son in their Louisiana home. After calling 911 and reporting himself as the shooter, to this day Anthony has never denied the crime but the events leading up to it are chilling. 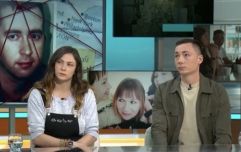 END_OF_DOCUMENT_TOKEN_TO_BE_REPLACED

With the trailer now released, it only adds more intrigue as it starts with a woman confessing: "The scariest thing about Anthony is he’s just kind of like a blank slate. I don’t know if he has empathy.”

Another woman says: "He died at the hands of his own son."

While an investigating officer said: "He said his father physically attacked him – I did not see any bruising or injuries to Anthony."

But as the tone of the trailer changes, Anthony himself appears saying: "I shouldn’t be charged with anything because I didn’t do anything wrong."

I Just Killed My Dad joins Netflix on Tuesday, August 9.

popular
Fans unimpressed with the Love Island reunion
Lauren Goodger assaulted and taken to hospital after baby girl's funeral
Everything we know about the Love Island reunion
Tasha's dad responds to Jacques' Instagram video
Barry Keoghan and girlfriend Alyson welcome their first child together
Are You The One? UK's Thérèse Mullaghan opens up on the reason she went on the show
These baby names are set to be popular in 2030 (so maybe get in there now!)
You may also like
2 days ago
Two new cast members join Selling Sunset cast
3 days ago
Netflix about to unleash new dating show with extremely weird twist
1 week ago
There's massive flaws in the Virgin River timeline – and we can't unsee them
1 week ago
Netflix confirm That 70s Show spin off series
2 weeks ago
Virgin River fans have a brand new theory about Charmaine's babies
2 weeks ago
Everything we know so far about Bridgerton season 3
Next Page