The segment has been a much-loved kids' feature for years.

FM104 have issued a statement apologising for joking about a voicemail sent in by a four-year-old boy with additional needs.

The voicemail was aired during the station's Strawberry Alarm Clock’s Kids in the Car show. Presented by Jim-Jim Nugent and Mark 'Nobby' Noble, the segment has been a much-loved kids' feature for years. 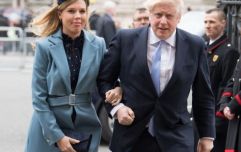 END_OF_DOCUMENT_TOKEN_TO_BE_REPLACED

Yesterday, a four-year-old boy with dyspraxia submitted a WhatsApp voice note to the segment to tell them "how great his Daddy was."

However, mum Kellie Sweeney claimed the presenters "took the p**s out of him for the sound of his voice and the delay getting the words out."

The incident sparked outrage amongst Irish Twitter users and listeners who were eager to show support for both mother and son. Many reached out to FM104 to complain.

Last night, the station released a statement "to apologise for making light of" the voice message.

"During the Strawberry Alarm Clock’s Kids in the Car feature, one of our presenters made a joke about not being able to hear a voice message we received from a young boy, who we later learned has additional needs," a spokesperson for FM104 said. "We have been in touch with the family to make a personal apology.

"...There was no intention to cause deliberate upset or harm, but today we made a mistake and have begun a robust review of our internal processes."

popular
You can now get paid to watch every episode of Grey's Anatomy
POLL: Vote now to see which side you're on in this Irish head-to-head battle
Love Island: You need to see Millie's dad's Instagram
Love Island fans spot Millie and Liam doing same weird gesture in bed
Love Island: Kaz's family issue statement after "vulgar racist abuse"
The islanders are in for a cinematic treat full of their own drama tonight
18-year-old TikTok star Timbo the Redneck dies after stunt goes wrong
You may also like
1 day ago
KFC themed hotel opens in UK with free chicken delivered to your room
2 days ago
Queer Eye's Tan France and husband Rob welcome baby boy
2 weeks ago
Schoolgirl reduced to tears by teacher after being told remove her fake eyelashes
3 weeks ago
Long Covid has more than 200 symptoms, according to study
3 weeks ago
Comedian Andrew Lawrence's Twitter deleted and comedy shows cancelled after 'racist' tweets
4 weeks ago
Parents arrested after 'keeping body of young son in freezer' for nearly two years
Next Page