The incident occurred on August 30.

Gardaí are appealing for witnesses after a woman was seriously injured in a hit-and-run in Co. Kildare.

The incident occurred near Rosconnell Estate, Newbridge, at 10.20am on August 30, when a female pedestrian was seriously injured in a collision. 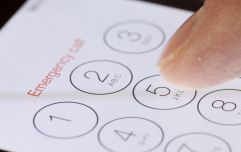 END_OF_DOCUMENT_TOKEN_TO_BE_REPLACED

The injured woman, in her 40s, was taken to Tallaght Hospital for treatment. Her injuries have been described as serious but not life threatening.

It is believed the woman was standing beside a car when she was struck by another car, which failed to remain at the scene. Two other cars were also damaged in the incident.

CCTV of the surrounding area is currently reviewed, and Gardaí are appealing for any witnesses to the incident to come forward.

Authorities are also appealing for information on a blue Ford Focus hatchback car and for the driver of this car to come forward. The car was last seen on the Dublin Road in Newbridge with damage to both the left and right sides. It has yet to be located.

popular
Penneys has just announced they are bringing out a furniture collection
A new bank holiday may be on the way as part of this year's Budget
Here's your first look at the Call The Midwife Christmas special
999 calls to Gardaí continue to be cancelled, says Garda Commissioner
It looks like the last few months of Diana's life will be on The Crown
Why Are Men so Obsessed With Boobs? The Answer is Pretty Surprising...
Miracle baby on the way for bride whose partner died on wedding day
You may also like
1 day ago
Man hospitalised after being shot in both legs in Co. Down
2 days ago
Tributes pour in for 28-year-old primary school teacher killed in London
5 days ago
These are the restrictions being lifted today
5 days ago
Body found in search for missing YouTuber Gabby Petito
1 week ago
Mother charged with murder of three children in New Zealand
1 week ago
Two people die in separate road collisions in Meath and Donegal
Next Page