Heathrow Airport has suspended all flight departures amid reports of a drone sighting.

A spokesperson for Heathrow airport said that they were working with police officers to "prevent any threat to operational safety."

The news as announced shortly before 5pm on Tuesday afternoon.

In a statement issued on social media, they apologised to passengers "for any inconvenience this may cause."

"We are responding to a drone sighting at Heathrow and are working closely with the Met Police to prevent any threat to operational safety.

"As a precautionary measure, we have stopped departures while we investigate.

"We apologise to passengers for any inconvenience this may cause."

A number of flights are currently circling the airport in west London, according to the flight tracking website Flightradar24.com.

Chris Grayling, the UK Secretary of State for Transports, said:

“We are in contact with @HeathrowAirport concerning the drone sighting. I have already spoken to both the Home Secretary and Defence Secretary and the military are preparing to deploy the equipment used at Gatwick at Heathrow quickly should it prove necessary.”

The news comes a few weeks after a reported drone sighting sparked three days of disruption at Gatwick Airport. 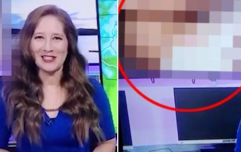 END_OF_DOCUMENT_TOKEN_TO_BE_REPLACED

More than 1,000 flights were cancelled and 140,000 passengers were affected by the disruption, which happened just before Christmas.

Two people were arrested over the incident and questioned in custody for 36 hours. They were released without charge.

popular
WATCH: Parents see person walk past daughter's crib in creepy baby monitor footage
Heavy rain and unsettled conditions forecast for Bank Holiday weekend
Young woman suffers serious eye injury after being struck with a firework in Eyre Square
Maria von Trapp's daughter has died aged 90
At least seven bodies have been found in search for Brian Laundrie
Human remains found positively identified as Brian Laundrie
Weather warning issued for 2 counties ahead of "heavy rain" this weekend
You may also like
1 day ago
Notebook and backpack belonging to missing Brian Laundrie found alongside human remains
2 days ago
Equality for Children campaigners achieve rights after 5 years
2 days ago
Police investigating viral video of child being 'forced' to have ears pierced in UK
2 days ago
Tesco is refunding 27,000 customers after overcharging them
2 days ago
Glenda Gilson announces departure from Virgin Media
2 days ago
Skeletal remains of six people found under Cork pub
Next Page