'I'm not trying to insult anyone...' says Putin as he insults women

Russian President and all-round nice guy, Vladimir Putin, again showed his support for the feminist movement in a recent interview.

Said no one ever!

No, unfortunately Vlad was busy saying some fairly ridiculous things about women and our ‘natural cycles’.

If that made you gag a little, you weren’t the only ones.

END_OF_DOCUMENT_TOKEN_TO_BE_REPLACED

Over the last two years, screenwriter Oliver Stone has conducted dozens of interviews with the Russian president, and this was just one of the vomit-inducing things he had to say.

In an effort to get into the psyche of the former KGB operative, Stone asked the president if he ever has off days.

To which Putin responded: “I am not a woman, so I don’t have bad days.”

“I am not trying to insult anyone. That’s just the nature of things. There are certain natural cycles.” 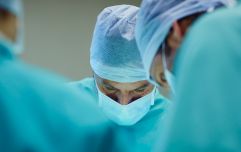 Twins conjoined at the head separated after 12-hour surgery

END_OF_DOCUMENT_TOKEN_TO_BE_REPLACED

The interviews are all being used in a four-part film which will air next week on Showtime.

So, if you're looking for more cringe-worthy insights into the female anatomy or admissions of interference in the US election, might be one to check out - but we’re not sure how many more of those types of statements we can endure.

popular
Terrie McEvoy responds to trolls who commented on her pregnancy weight
Ariana Grande just dropped a breakup song about Pete Davidson AND Mac Miller
Forget Making a Murderer, This Crime Documentary is Finally on Netflix
Derry Girls star speaks out after show called "distinctively British"
Police release bodycam footage of missing YouTuber Gabby Petito
The 'secret' Zara label signs that'll apparently help you get the right size every time
Gwen Stefani reportedly pregnant with baby number four
You may also like
1 week ago
Man dies following shark attack in Australia
3 weeks ago
Afghan woman gives birth on evacuation flight to Germany
1 month ago
Three-year-old accidentally shoots mother in the head during work Zoom call
1 month ago
Simon Coveney confirms 15 Irish nationals are seeking to flee Afghanistan
1 month ago
ITV says there are "no current plans" for a next series of The X Factor
2 months ago
Pfizer is seeking authorisation for a third dose of its Covid-19 vaccine
Next Page