A pretty miserable way to start the last week of the summer.

A status yellow rainfall warning has been issued for all 26 counties in the Republic of Ireland ahead of what is set to be a very wet start to the week.

A rainfall warning had been issued on Sunday for all five counties in Connacht, as well as Donegal, Cork, Kerry and Waterford, a warning which was due to come into effect at midnight tonight.

As of early on Monday morning, that warning has now been extended to all of the Republic of Ireland and will come into effect at 9pm on Monday, remaining in place for 24 hours.

Met Éireann says “intense rainfall” is expected at times on Monday night and on Tuesday. Falls of 30 to 50 mm are expected with surface flooding likely as a result.

The national forecaster has also warned that the heavy rain will further elevate river levels and may result in river flooding.

If all that wasn’t enough, a status yellow wind warning has also been issued to all six counties in Munster, as well as Carlow, Kilkenny and Wexford.

Strong southwest winds are expected to veer westerly across the affected counties with widespread mean speeds between 50 and 65km/h and gusts between 90 and 110km/h, higher in coastal areas. 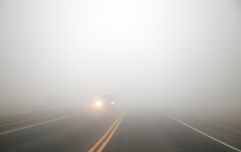 END_OF_DOCUMENT_TOKEN_TO_BE_REPLACED

That warning comes into effect at 6am on Tuesday and will remain in place until 7pm on Tuesday evening.

There is a brief chink of light at the end of the tunnel on Wednesday, when dry and sunny weather, with only occasional scattered showers, is expected, with highs of up to 20 degrees.

Further unsettled conditions are anticipated on Thursday and Friday, however, with the possibility of isolated thunderstorms.

The early forecast suggests that this weekend will see drier and calmer weather, with plenty of sunny spells, although it will be cooler due to northwest breezes.

popular
Family of four found dead in hotel sauna
It looks like it's all over between Maura Higgins and Giovanni Pernice
Shirley Ballas books breast exam after Strictly viewers spot lump
Police search for missing 4-year-old girl in Australian outback
"Real-life consequences": Strictly's Adam Peaty addresses near-kiss rumours
Will the clubs be reopening on October 22? Here's what we know so far
Breast cancer survivor Tracy Bennett wants to raise awareness for "sneaky" type of cancer
You may also like
1 week ago
Weather warning issued for 5 counties amid unseasonably hot October weather
2 weeks ago
A rain weather warning has been issued for 3 counties
1 month ago
Rain weather warning issued for two counties
1 month ago
Thunderstorm and rain warnings issued for all of Ireland as Indian summer comes to abrupt halt
1 month ago
A mini heatwave is coming to Ireland this week
1 month ago
Long spells of "late summer sunshine" to continue next week
Next Page