Gardaí have launched an appeal for information in relation to a robbery at an ATM in Terenure this morning.

The incident occurred shortly before 5am, when a businessman was held at gunpoint while he attempted to withdraw cash at an ATM.

According to RTÉ News, the assailant was a man dressed as in women's clothing and a large sum of cash was taken during the robbery. 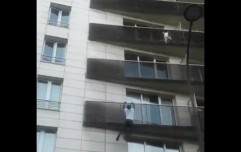 END_OF_DOCUMENT_TOKEN_TO_BE_REPLACED

The thief was accompanied by a second man and the two sped away in the direction of Terenure village in a silver Hyundai with the registration 12 CE 1549.

The car had a taxi sign on the roof and was later found in the Harold's Cross area.

Gardaí are appealing for witnesses  who may have passed the ATM machine at the Bank of Ireland, Terenure Road East between 4.30am and 4.45am. Anyone who may have seen any unusual behaviour should contact them in Terenure on 01 6666400, the Garda Confidential Line on 1800 666 111 or any Garda station.

popular
Claire Byrne Live viewers in shock as woman shares family DNA secret
Teenager dies in sand collapse after digging hole on beach
Sarah Jessica Parker says she has not spoken to Chris Noth since sexual assault allegations
Gogglebox fans show an outpour of support for star after hospital picture
Derry Girls creator shares three more storylines that never made it into the show
Man behind Marilyn Monroe dress says letting Kim Kardashian wear it was a "big mistake"
Sex educator Jenny Keane is back to answer more of your sex and pleasure questions
You may also like
5 years ago
Pointing a finger: so the Welsh coastline is more interesting than we thought
7 years ago
Man Charged In Connection With Death Of Couple In Donegal
7 years ago
Man Chops Off His Own Penis After Girlfriend Criticises His Bedroom Performance
7 years ago
Man Comes Up With Interesting Plan to Get Over His Ex-Girlfriend
4 days ago
Charlie Bird "blown away" by people's kindness as his charity campaign raises over €3 million
5 days ago
Irish mum dies in Turkey after travelling for medical procedure
Next Page