It's GOLD for Ireland! The country has a brand-new 100m sprint superstar

"Ireland don't get many sprint medals... "

Something of an understatement, arguably. Yes, we're all about middle distances in this fair isle... but that could all be about to change.

It was 38 years since Ireland had two sprinters in a 100-metre European Championships final but Gina Akpe-Moses and Ciara Neville ended that streak then went on one of their own. 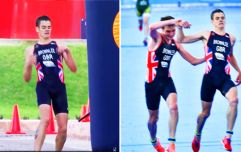 END_OF_DOCUMENT_TOKEN_TO_BE_REPLACED

Neville had a fine run but it was nothing compared to Dublin sprinter Akpe-Moses, who pipped Keshia Kwadwo of Germany to the gold medal at the European Athletics U20 Championships.

Running into the wind, Akpe-Moses raced home in 11.71, which was 0.15 shy of a season best she ran back in May. It was enough for gold, though. More than enough.

Gina Akpe-Moses wins the 100m at the European U20 Championships in 11.71 from Germany's Keshia Kwadwo. #Grosseto2017 pic.twitter.com/UbMdSA0njQ

The 18-year-old broke down in tears after realising her stunning run was the best of the lot. Neville was the first to congratulate her on a fantastic performance. She told Athletics Weekly:

"It was amazing and I’m so excited.

"I hoped to get a medal, and eventually the dream came true. In the semi-finals I started thinking I could jump on the podium, but only in the last 20m of the final I had the thought ‘I can get the gold medal’."

popular
The internet is saying the same thing after Ryan's Toy Show opening
Dancing On Ice 2022 star Brendan Cole rushed to hospital after head injury
We finally know what happened to Sam in And Just Like That
Viewers in bits after Barry Humphries congratulates Dermot O'Leary on coming out
Strictly's John Whaite feels "reborn" after topping leaderboard with Johannes Radebe
Top 9 moments from the Toy Show we're still talking about
The Toy Show DJ brothers have been offered their very first gig
You may also like
1 month ago
Marian Heffernan: "There's always been so much talent coming through Ireland"
3 months ago
Team Ireland have been crushing it at the Paralympics - and we're just getting started
3 months ago
Phil Healy: "Ireland can compete on the world stage in relay"
4 months ago
Norwegian handball team fined for refusing to wear bikini bottoms
5 years ago
Watch as Usain Bolt wins the 100m Olympic final in style
6 years ago
Women In Sport: Javelin Star Anita White Talks Injuries, Dedication And The Road To Rio
Next Page