Ireland is now officially in recession

Earlier this year, the ESRI warned that the Irish economy was facing into the largest recession in history.

Figures released by the Central Statistics Office (CSO) on Monday (7 September) have revealed that Ireland is now officially in recession.

The CSO figures revealed Gross Domestic Product (GDP) contracted by 6.1% in the second quarter of 2020. An initial estimate that GDP had increased by 1.2% in the first quarter of the year was subsequently revised downwards.

END_OF_DOCUMENT_TOKEN_TO_BE_REPLACED

A recession is identified by a fall in GDP in two successive quarters.

The 6.1% drop in the second quarter of 2020 is the largest ever recorded and has been attributed to the “severe and acute impacts of the Covid-19 restrictions”. While those restrictions took effect from March, the CSO said the first quarter was not impacted by the full severity of the pandemic.

Economic activity in the construction sector alone contracted by 38.3% and in the Distribution, Transport, Hotels and Restaurants sector by 30.3%. 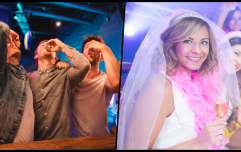 END_OF_DOCUMENT_TOKEN_TO_BE_REPLACED

Activity in the multinational-dominated Industry sector actually grew by 1.5% in the second quarter of 2020, but Gross National Product (GNP) - a measure of economic activity that excludes the profits of multinationals - contracted by 7.4%.

In May of this year, the Economic and Social Research Institute (ESRI) warned that Ireland was facing into the “largest recession in history”, anticipating that consumer spending would fall by 13% and that unemployment in Ireland would average out at 17%.

popular
Journalist Richard Engel shares news his six year old son has died
Infant boy killed in tragic road accident in Roscommon
Gerard Butler pays tribute to "brother in arms" Darius Danesh
Love Island USA has done an Adam Collard on it and brought back an old islander
Sarah Jessica Parker offers to help out at Dublin restaurant
Jason Oppenheim addresses Christine's Selling Sunset departure
Vogue Williams slams man who refused to swap seats with her on plane
You may also like
4 days ago
Status Orange thunderstorm warning issued for 14 counties
6 days ago
Met Éireann extends high temperature warning for Ireland this weekend
1 week ago
Danny Healy-Rae insists the Puck Fair goat is safe and well looked after
1 week ago
Irish people could be treated to spectacular sights in the sky over the next few nights
1 week ago
Puck Fair takes down goat from cage due to "unprecedented" hot weather
1 week ago
Forget about ultra cheap Ryanair flights for the foreseeable future, says O'Leary
Next Page