People are still being urged to stay at home and not to mix with others.

At Monday night's press briefing, Professor Philip Nolan said that Ireland remains on track to have 200-400 cases per day by the end of February, if people are to stay at home.

Nolan said that if we are to act the way we have been over the past number of weeks, the numbers should decrease significantly. 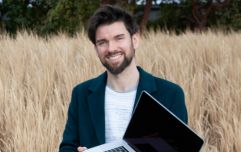 END_OF_DOCUMENT_TOKEN_TO_BE_REPLACED

He also urged people not to be disheartened by the fact that progress appears to be "slower".

"The most important message is if we continue to act as a society for the next three or four weeks, the way we have been acting for the last five weeks, then yes we're still on track."

Prof Philip Nolan says says we're still on track for 200-400 cases a day by the end of February if we continue to stay home and not mix | https://t.co/Sd3qcF0Pv3 pic.twitter.com/N1b9xbpPGX

Nolan also said that we are now seeing the case numbers increase as a result of testing close contacts of confirmed cases again.

Girls With Goals || Her · Ep.156: 'Beauty Returns' - Rebecca O'Keeffe is BACK and we're talking about viral beauty trends
popular
Palace source says THIS incident on the tour of Australia upset Meghan's staff
Tried and tested: I tried the viral TikTok mascara hack to see if it really works
Someone has ranked the penis size of men from all over the world
The Queen has banned Meghan Markle from wearing any of Princess Diana's jewellery
Here's what happens on every day of your menstrual cycle (roughly)
Kate Middleton has addressed the rumours that she's pregnant with her fourth child
Why Are Men so Obsessed With Boobs? The Answer is Pretty Surprising...
You may also like
1 day ago
Mayo beach named among the best in Europe by Lonely Planet
2 days ago
Bank of Ireland to close 103 branches across Ireland and Northern Ireland
5 days ago
The most popular baby names in Ireland in 2020 have been revealed
5 days ago
Two elderly men found dead as Gardaí "urgently" search for red van in Cork
6 days ago
Teenager seriously injured in Dublin shooting
1 week ago
Cabinet sub-committee recommends Level 5 restrictions until April
Next Page