The Duchess of Cambridge looked radiant as she stepped out today with Prince William.

Making a surprise appearance at Paddington Station to meet the cast and crew from upcoming film Paddington 2, Kate sported a shorter haircut than before and a blush pink Orla Kiely dress.

Their Royal Highnesses meet cast and crew from #Paddington2 who will join guests on their journey through the English countryside pic.twitter.com/M49jA2Keft

END_OF_DOCUMENT_TOKEN_TO_BE_REPLACED

This is the Duchess' second time stepping out since the announcement that she is pregnant with her third child alongside her husband, the Duke of Cambridge.

Kate was also joined by Prince Harry as they greeted the bear and had a little dance while briefly exchanging a few words. 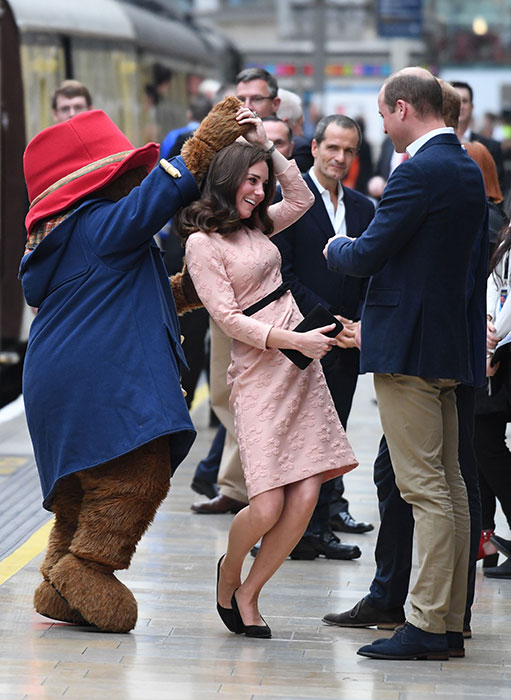 The royal family then boarded a train to meet young passengers who had been nominated by Their Royal Highnesses’ Charities Forum.

Publishing pictures on its official Twitter account, Kensington Palace said, "Many of the children on today’s journey are going through difficult times in their lives."

Many of the children on today’s journey are going through difficult times in their lives pic.twitter.com/XlpIop2Q4O

popular
Skeletal remains of six people found under Cork pub
How to turn 20 days of annual leave into 50 days off
Richard Madeley under fire for comments about Kate Middleton's waist
WATCH: The first trailer for Ozark Season 4 just dropped
Man arrested after woman raped on train as passengers filmed it
Apparently, THIS is the reason why Louise Redknapp split from Jamie Redknapp
70-year-old woman reportedly becomes first-time mum after welcoming baby boy
You may also like
1 week ago
Kate Middleton might be getting her own TV show
1 month ago
Prince William and Kate moving family out of London for more 'privacy'
1 month ago
“They’d never force him to go”: Kate and William to decide to send Prince George to boarding school or not
2 months ago
Kim Kardashian addresses "nasty" Kate Middleton comparisons while pregnant
2 months ago
“Mummy, please stop taking photographs” - Prince George turns 8 years old today
3 months ago
Kate Middleton confesses "mum guilt" around saying goodbye to her children
Next Page