If there's one thing that we can all agree on, it's that koalas deserve better.

If things keep going the way that they are, the koala bear could go out the same way as the dodo, and NONE of us want that to happen.

According to Sky News, the Australian Koala Foundation's chairman Deborah Tabart says there are no more than 80,000 koalas in the country and although this might seem like plenty, there are not enough breeding adults to support the next generation.

Tabart said that the term "Functionally extinct is a scientific term to describe the species as being beyond the point of recovery".

She also called on Australia's prime minister Scott Morrison to look after the koalas, saying: "The plight of the koala now falls on his shoulders."

"I know the Australian public are concerned for the safety of koalas and are tired of seeing dead koalas on our roads." 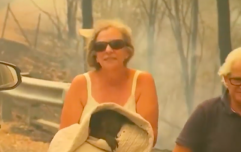 Koala rescued from Australian bushfire has died from his injuries

END_OF_DOCUMENT_TOKEN_TO_BE_REPLACED

The cute tree-dwelling species has been ravaged by the effects of rising temperatures and heatwaves across the country, which has resulted in fatal dehydration.

Experts suggest that all it will take is one new disease to be introduced to the ecosystem to result in the complete extinction of the bear.

A week ago, Ireland became just the second country to declare a climate emergency, and this week, CO2 levels reached their highest point in human history.

popular
QUIZ: How well do you remember The Princess Diaries?
Will Smith admits to 'failing miserably' in 21-year marriage to Jada Pinkett Smith
QUIZ: How well do you remember the 2005 movie Pride & Prejudice
5 new additions to Netflix to spend your Saturday night watching
Security footage released of Naya Rivera as search is updated to recovery mission
14 new books you won't be able to put down this July
Here's what happens on every day of your menstrual cycle (roughly)
You may also like
1 month ago
Australian wildlife park welcomes first baby koala following bushfires
5 months ago
Lush has just launched a koala shaped soap to raise money for the Australian bush fires
1 week ago
Hairdressers, restaurants, hotels, and pubs serving food officially reopen today
1 week ago
Aldi trialing on-demand rapid deliveries with Deliveroo from today
1 week ago
The killing of Elijah McClain: here's what you should know
2 weeks ago
10-year-old Carlow boy passes away after collision between bicycle and jeep
Next Page