They were together from the very beginning.

Whether you watched Love Island Australia or not, chances are you’ll recognise fan-favourite Erin thanks to her brutally-honest opinions and amazing facial expressions that made for GIF gold.

Erin partnered up with Eden on the very first episode and the pair were inseparable for the entire series.

Finishing up in second place, viewers had high hopes the couple would go the distance, however, two weeks ago the pair announced they had split but would remain friends.

Well, looks like friends is off the cards now after Eden claimed that “numerous cheating rumours” led to their breakup.

“We had messages from strangers saying different things and that was a bit of a strain on the relationship,” Eden said in an interview with the Kyle and Jackie O Show.

“If I ever did a nightclub appearance or anything, a girl would message [Erin] and say, ‘Eden was playing up’, or, ‘Eden was getting rowdy with these girls’.”

However, what Eden probably didn’t bank on was the fact that Erin was listening to the live interview and actually called into the show as her ex was leaving the building.

“He is a liar,” she told the hosts and followers on Instagram.

“And the fact that he has gone to the radio and has said lies blows my mind because he knows that I’ve got evidence, and if he wants me to come out and full show everyone then I will do that.” 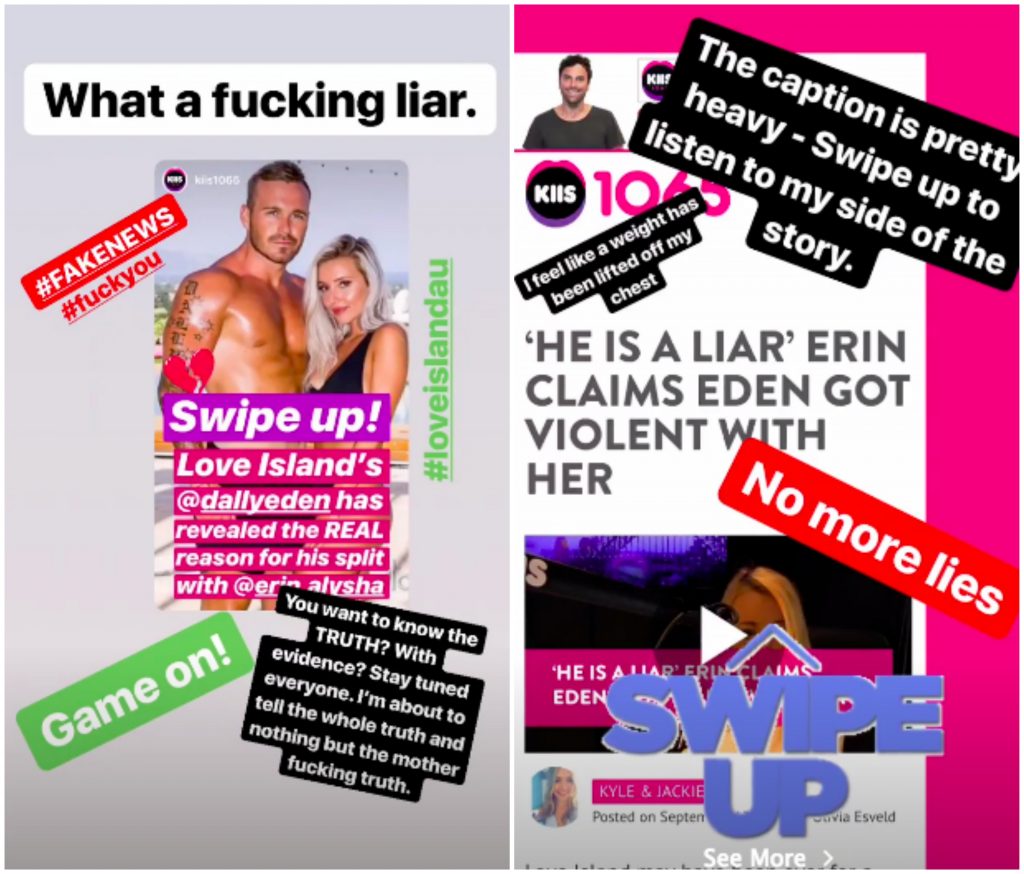 Erin went on to accuse Eden of having “violent tendencies” and claimed he tried to “kill us both in the car”.

“The real reason we broke up is because Eden has violent tendencies and he got very aggressive to me the day after we finished Love Island in Spain and there is something else who can vouch for me for this.

“So, he got very, very up in my face violent … and he got very aggressive in the car and I said I didn’t want to be with him and he tried to kill us both in the car, swerving side-to-side, all out of lanes into other cars.”

Erin went on to say that she had evidence that Eden also cheated on her.

Eden has since responded to Erin's claims on his Instagram stories, saying:

"There are two sides to every story. Nothing like a woman scorned." 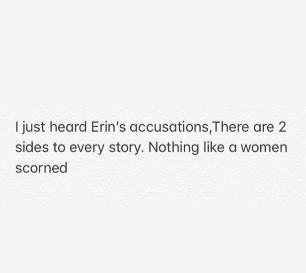 The pair announced the had broken up back on September 2 saying that “after much deliberation, we have quietly partly ways.”

popular
Deborah James "scared to go to sleep" as she receives hospice care
Final episode of Neighbours to air on Irish TV in August
Irish mum shares "harrowing" experience after kids almost abducted in Turkey
Wagatha Christie: Rebekah Vardy storms out of court just 30 minutes into final day
Tributes paid after Love/Hate actor Stephen Clinch dies aged 52
This Is Us stars say goodbye to show after emotional final episode
Airport passengers left furious as queues stretch all the way to car park
You may also like
4 hours ago
Study shows cost of living crisis is affecting period hygiene
5 hours ago
Love Island axes "disgusting" food challenges for 2022 series
5 hours ago
Those worse off in cost of living crisis to get aid in 2023 Budget
8 hours ago
First Dates Ireland is officially looking for new singletons to join the show
9 hours ago
Kate Moss denies Amber Heard claim that Johnny Depp pushed her down staircase in Jamaica
9 hours ago
Buying or building your first home? This FREE virtual event is perfect for you
Next Page