Weather warnings are also in place for the entire country.

If you're late to making any weekend plans, you might want to reconsider any outdoor activities - especially if you live in Donegal, Mayo, and Galway.

That's because Met Éireann has issued a status orange wind warning for those three counties. Aside from this orange warning, a variety of status yellow warnings are also in place for the entire country.

END_OF_DOCUMENT_TOKEN_TO_BE_REPLACED

With regards to Donegal and Mayo, the status orange wind warning is valid from 12pm on Saturday 8 February until 4pm later that day.

It states: "In advance of the arrival of Storm Ciara on Sunday, south to southwest winds on Saturday will reach mean speeds of 65-80km/h with gusts of up to 120 km/h."

A similar warning is in place for Galway, although the timings are different with the warning in place from 1pm on Saturday 8 February until 6pm on the same day.

That warning for Galway states: "In advance of the arrival of Storm Ciara on Sunday, south to southwest winds on Saturday will reach mean speeds of 65-80km/h with gusts of up to 120 km/h."

As for the remainder of the country, two distinct status yellow weather warnings are in place - one for wind, the other for rain.

In terms of the status yellow wind warning, on Saturday, expect to see 'southerly winds will strengthen during Saturday reaching mean speeds of 50-65km/h with gusts reaching 90-110km/h.'

As for Sunday, Met Éireann have said that: "Storm Ciara (named by the UK Met Office) will produce very strong winds over Ireland on Sunday with a risk of damaging gusts. Over the weekend the combination of Spring Tides and high seas as well as stormy conditions will result in an elevated risk of coastal flooding especially along southern, western and northwestern coasts." 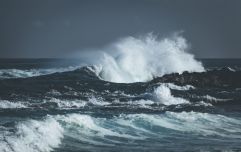 END_OF_DOCUMENT_TOKEN_TO_BE_REPLACED

That warning is in place from 9am on Saturday 8 February until 23.59pm on Sunday 9 February.

As for the status yellow rainfall warning, it's in place from 12pm on Saturday until 3pm on Sunday.

On Saturday, Met Éireann have said that: "A spell of heavy rain will spread eastwards across the country on Saturday with 20-40mm expected, highest in the west and northwest."

Expect another spell of heavy rain on Sunday which will clear to squally wintry showers. There's also a risk of localised flooding this weekend, especially over the western half of the country.

Girls With Goals || Her · Ep.156: 'Beauty Returns' - Rebecca O'Keeffe is BACK and we're talking about viral beauty trends
popular
Piers Morgan storms off GMB set during argument over Meghan Markle
Suzanne Jackson issues apology after Keilidh Cashell controversy
7 things we learned from Harry and Meghan's tell-all interview
A royal insider has revealed the truth behind Meghan and Kate's rumoured feud
Palace source says THIS incident on the tour of Australia upset Meghan's staff
Take our 'What's Your Pleasure? Her Sexual Experience Survey' for a chance to win a €250 One4All voucher
The Queen has banned Meghan Markle from wearing any of Princess Diana's jewellery
You may also like
1 week ago
Scarlett Moffatt discovers ‘30% rain’ on weather app doesn’t mean chance of rain
2 weeks ago
Yellow weather warnings issued for three counties amid flood risk
1 month ago
Snow weather warning now in place for eight counties
1 month ago
Met Éireann on "high alert" for snow expected next week
1 month ago
Siberian weather to bring snow, ice, and freezing temperatures to Ireland this weekend
1 month ago
Rain and snow warnings issued for 8 counties across Ireland
Next Page