More bad weather will arrive almost the second the storm passes over the country.

Not long after issuing an upgraded status orange wind warning for the entire country to go with the pre-existing three weather warnings already in place, Met Éireann has released an updated meteorologist's commentary for Storm Ciara and the weather we can expect once the storm has passed by.

"These gusts will affect parts of the country not normally impacted by such strong winds. Gusts will typically range between 100-130 km/h but they may exceed 140 km/h locally."

Storm Ciara is also set to bring "very wet conditions with localised flooding possible as intense falls of rain spread across the country with some embedded thunderstorm activity" but even once the storm has passed, the combination of Spring Tides, high seas and extremely windy conditions over the next few days will see "a significant risk of coastal flooding especially along northwestern and western coasts. This risk will persist into the middle of the coming week."

Additionally, once Storm Ciara has passed over Ireland, it will be replaced by much colder winds, which will likely result in scattered snow on Sunday night, and more as the week goes on: 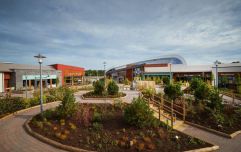 END_OF_DOCUMENT_TOKEN_TO_BE_REPLACED

"The risk of snowfall increases as we move into the coming week. While snow showers may occur anywhere they will occur chiefly in parts of the north and west."

"South to southwest gales or strong gales will develop on all Irish coastal waters and on the Irish Sea today. Winds reaching storm force 10 on coastal waters from Slyne Head to Erris Head to Malin Head and possibly touching violent storm force 11 for a time this afternoon."

popular
There's a Harry Potter themed Airbnb in Roscommon and we just need to visit
Staycation: 7 gorgeous glamping spots for your Irish summer getaway
QUIZ: How well do you remember The Rugrats Movie?
Broadway actor Nick Cordero dies following Covid-19 complications, aged 41
Lidl launches own fake tan and it'll only set you back €3.99
International travel restrictions due to Covid-19 are expected to be extended until July 20
Here's what happens on every day of your menstrual cycle (roughly)
You may also like
3 weeks ago
Micheál Martin set to serve as Taoiseach until end of 2022, as draft programme agreed
3 weeks ago
Appeal made for information after 14 dogs stolen in Limerick
3 weeks ago
25 percent increase in domestic abuse calls over the last year
4 weeks ago
Public urged to take shorter showers as hosepipe ban introduced in Ireland
1 month ago
Dr Tony Holohan: No gaff parties, we're in a pandemic
1 month ago
Aldi to sell reusable face masks from Thursday onwards
Next Page