The new law comes into effect from Tuesday.

Motorists in Ireland face a fixed charge of €120 and three penalty points for dangerously overtaking a pedal cyclist, under a new law protecting cyclists that will come into effect from Tuesday (12 November).

The new law, which builds on existing legislation, will make it an offence to dangerously overtake a pedal cyclist, with Minister for Transport, Tourism and Shane Sport Shane Ross TD saying that cyclists having “frankly terrifying tales to tell of intimidatingly close passes and near misses” was one of the reasons behind its introduction.

END_OF_DOCUMENT_TOKEN_TO_BE_REPLACED

Essentially, the fine for dangerously overtaking a cyclist will increase by €40, from €80 to €120; the number of penalty points accrued for the offence will remain the same as new primary legislation would have been required to make a change.

“The law that we are commencing at midnight will target and punish drivers who are guilty of such deadly, dangerous behaviour,” said Ross.

“Equally important is the impact I hope it will have on driver behaviour, providing a heightened awareness of the importance of sharing road space in a respectful and safe manner.

“Too many cyclists have frankly terrifying tales to tell of intimidatingly close passes and near misses. And we are all sadly aware of the worrying numbers of cyclists being killed and injured on our roads, despite a downward trend in road fatalities more generally.”

END_OF_DOCUMENT_TOKEN_TO_BE_REPLACED

Ross added that his department, the Road Safety Authority (RSA), An Garda Síochána and the Office of the Attorney General have worked closely together to develop a robust, legal mechanism to target drivers who put cyclists at risk in this manner.

Ross also announced that a Public Appointments Service competition will shortly be commenced to appoint four people to the Board of Transport Infrastructure Ireland, with the intention that one of the four posts be reserved for an individual with cycling expertise.

The new law has been welcomed by Dublin Cycling Campaign, who hailed it as a “step in the right direction” but warned that it will mean nothing without enforcement by An Garda Síochána.

END_OF_DOCUMENT_TOKEN_TO_BE_REPLACED

Dublin Cycling Campaign also expressed the hope that the new legislation will result in Gardaí being more willing and able to accept video footage from cyclists who have been overtaken dangerously.

I BIKE Dublin, however, who staged a number of demonstrations last week following the death of a cyclist in Dublin, have expressed concerns about the new legislation, calling it a “token gesture”, describing it as Shane Ross’ “latest sticking plaster” and saying that the minor amendment to the existing legislation will do nothing for the safety of people who cycle, particularly in urban areas.

I 🚲 Dublin press release ahead of Minister Shane Ross' photo op in his own constituency to announce his latest sticking plaster. 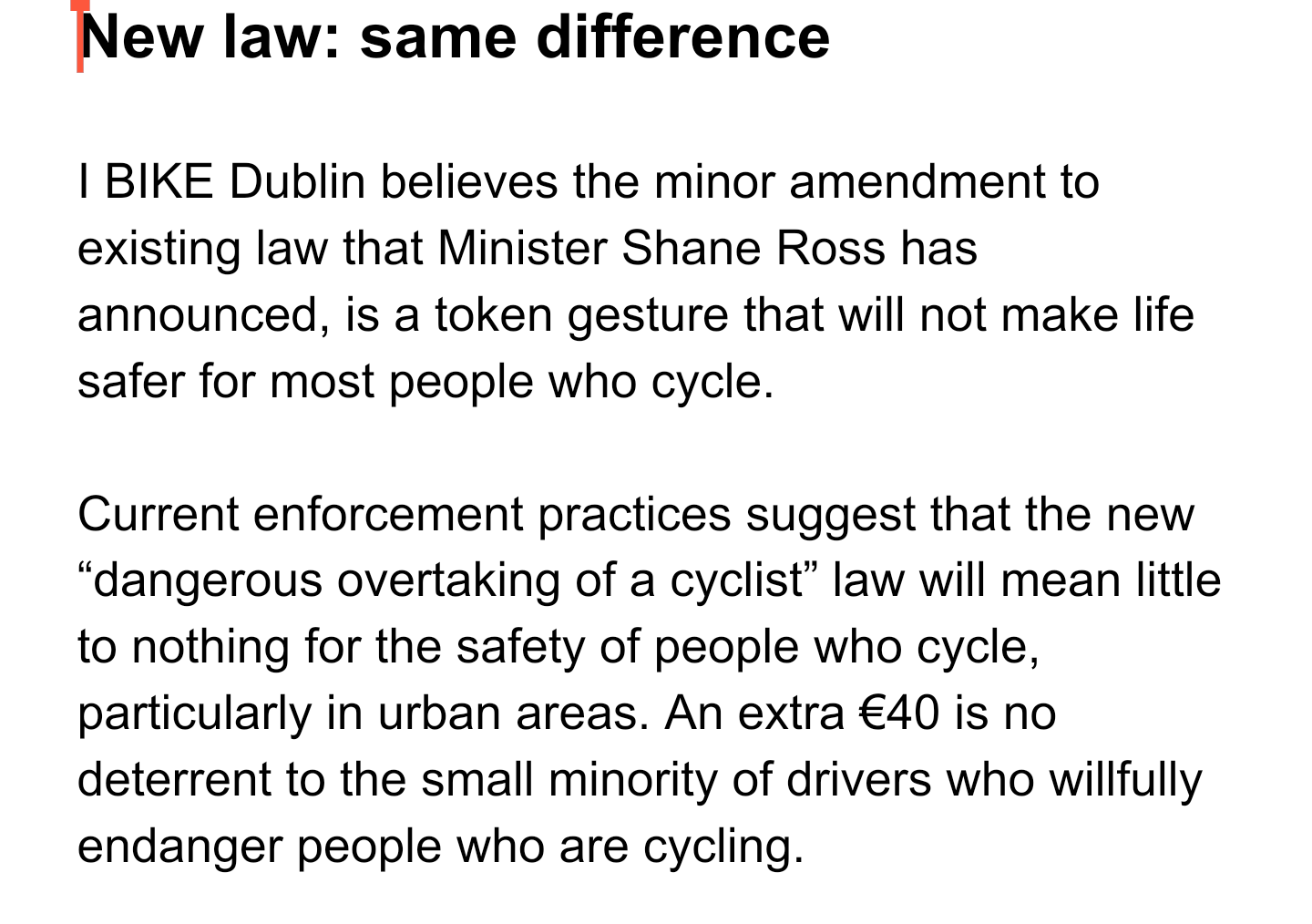 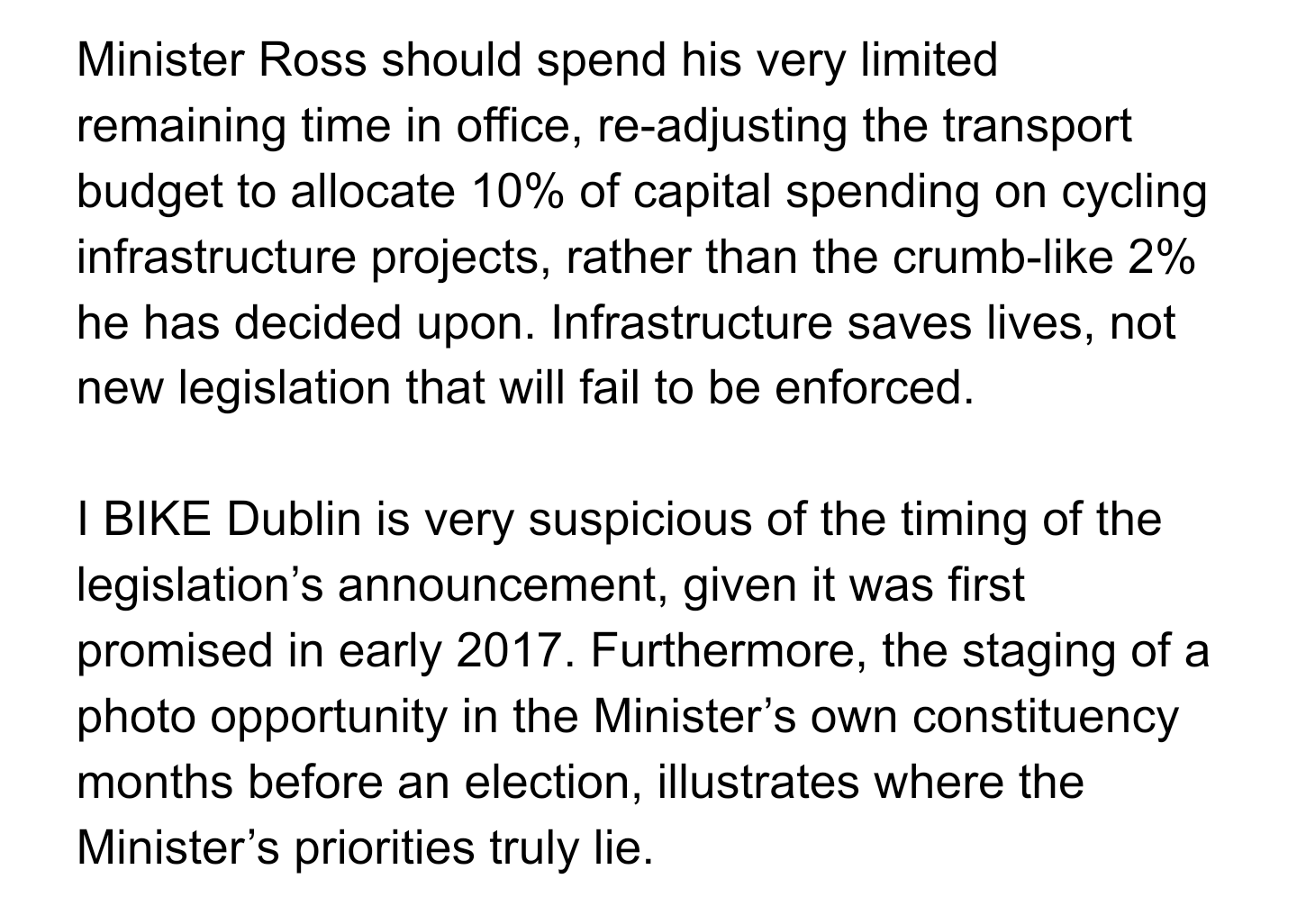 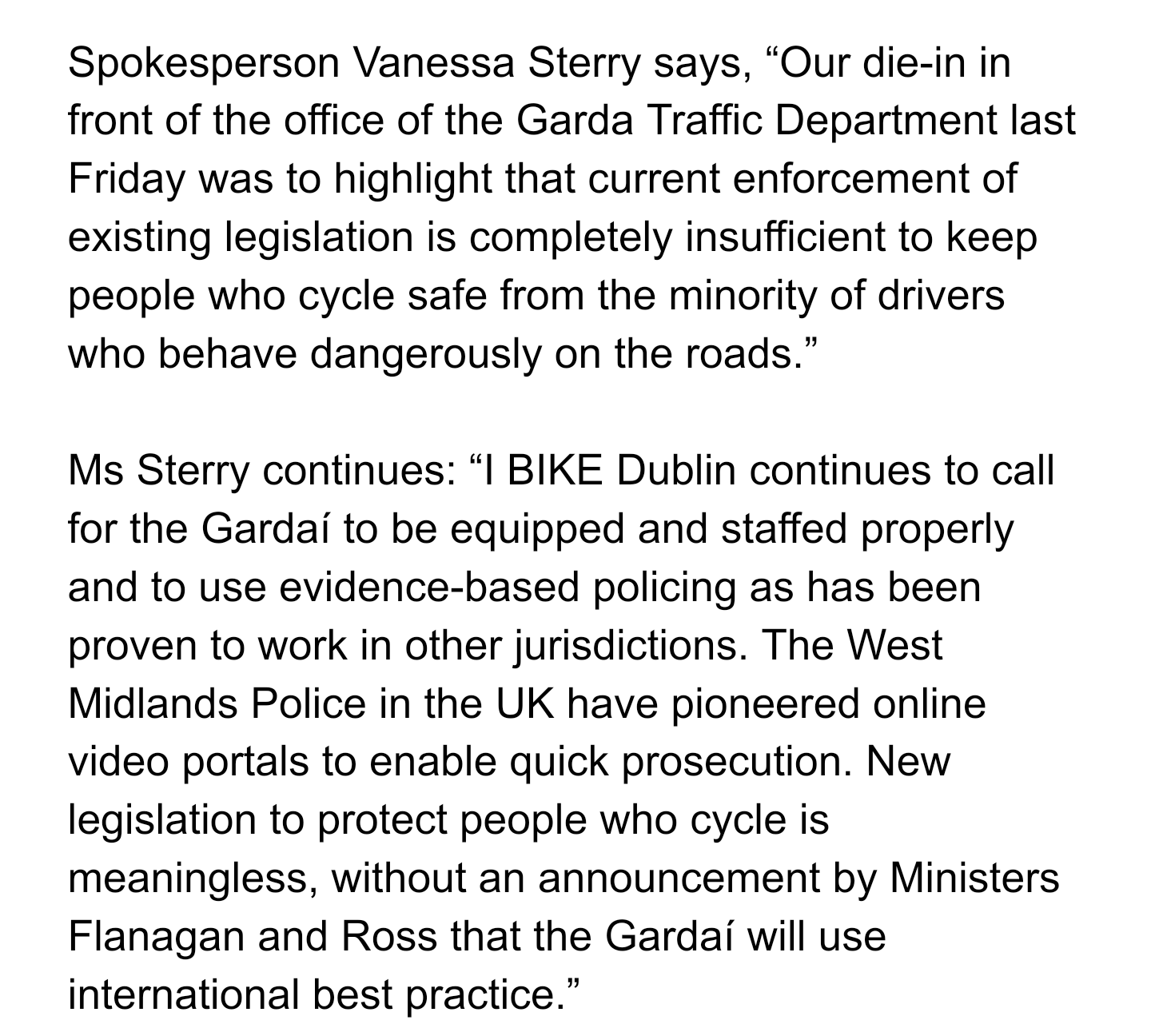 popular
Bride asks for divorce day after wedding following groom's disrespectful cake stunt
These are the most popular names for babies born in February
Does how late you enter the Love Island villa affect your chances? A super scientific study
'He's a changed man': Woman marries her 'high school bully'
Man sues friend for £1.9m after she refused to be his girlfriend
Perfect Scents - Niche Perfume Boutique Opens in the Capital
We have St. Brigid to thank for our new bank holiday, but who exactly was she?
You may also like
1 week ago
Irish pizzeria given perfect score by top food reviewer
1 month ago
Russell Crowe donates €5,000 to Irish book club charity appeal
2 months ago
US fast food chain Wendy's planning to open in Ireland
2 months ago
Employment lawyer and TikTok sensation Richard Grogan has passed away
2 months ago
Calls to remove 'inhumane' 12-week limit on abortion services in Ireland
2 months ago
Status Yellow warning issued with heavy rain and wind on the way
Next Page