Conor Skehan is the chairman of the Housing Agency in Ireland and on RTÉ's Morning Ireland this morning he called for more action to resolve the housing crisis in the country.

The agency released a new report today which estimates that there are almost 250,000 houses lying vacant across the country.

Skehan was speaking on RTÉ's Morning Ireland, he said that the quantity of vacant homes in the country could create an opportunity to maintain housing supply for two years, of owners of the homes are given an incentive to open them up.

"He said refurbishment grants for vacant homes or short-term taxation breaks on rental income when someone puts a vacant property into use could be launched."

Skehan noted that in other European countries, homeowners are actually penalised for having properties that are left vacant in the long term. 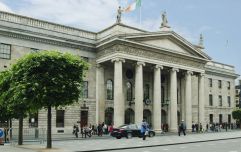 END_OF_DOCUMENT_TOKEN_TO_BE_REPLACED

Minister for Housing, Planning and Local Government Simon Coveney said his new housing policy that will be launched by the end of July could take a look at incentivising homeowners to put their vacant properties back into use.


popular
David Beckham shared his dinner on social media and we really wish he hadn't
This is how much money you get if you make it to your 100th birthday in Ireland
Dad hides coronavirus symptoms from hospital staff in order to see newborn
RTÉ share details of new classic movie schedule - and it all kicks off tomorrow
The lineup for tonight's Late Late Show has been revealed
#Covid-19: Dwayne Johnson reprises Moana role to teach his young daughter how to wash her hands
#Covid-19: Trinity College researchers find that Vitamin D can help fight coronavirus
You may also like
3 months ago
'Absolutely appalling' - Brother Kevin Crowley hits out at government on homeless crisis
11 months ago
Number of homeless children in Ireland soars to record high of 3,800
1 year ago
How homelessness affects a woman's mental health, even after she has been rehoused
1 year ago
Woman and six children sleep on chairs in Dublin Garda station overnight
1 year ago
Shock for Coronation Street as Sean Tully becomes homeless
2 years ago
'I've applied for 700 properties since June' - The frightening reality of homelessness
Next Page