The muggy conditions are set to continue for a few more days yet.

You may have noticed that conditions in Ireland have been somewhat warm and humid of late.

It hasn’t been sweltering or anything - and we don’t want to be that person who complains every time it gets ever-so-slightly warm - just a little bit uncomfortable at times, particularly when you’re trying to get some sleep at night.

‘Close’ is how it would be described in many parts of the country...

Anyway, those conditions are set to persist for the foreseeable future, with temperatures in excess of 20 degrees set to be the norm until at least Wednesday of next week.

According to Met Éireann, the mercury will hit 26 degrees in parts of Ireland on Friday, with the warmest conditions set to prevail in northern areas. 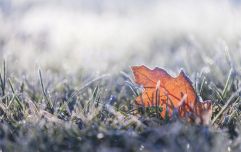 END_OF_DOCUMENT_TOKEN_TO_BE_REPLACED

When the weather is as humid as it has been recently, the threat of thunderstorms is never far away and the southern half of the country is likely to be most vulnerable on Friday, as well as experiencing occasional heavy showers throughout the day and into Saturday morning.

Rain will spread from the south into Connacht and Leinster on Saturday, but there will be plenty of dry spells in northern Connacht and Ulster, with temperatures again hitting highs of 25 degrees.

Hot and humid weather with occasional showers is pretty much the order of things until Wednesday of next week, which, according to the current forecast, is due to start off warm and dry before a southeast wind and rain showers bring fresher conditions on Thursday and into the following weekend.

Until then, you might have get used to sweaty clothes and some tossing and turning in bed as there are more muggy days and nights ahead.

popular
Will there be a second season of Gilmore Girls: A Year In The Life? Here's what we know
Edward from Jedward has confirmed that he is not single anymore
QUIZ: Can you name all 32 counties in Ireland in under 4 minutes?
'Here's The Story': Mary McAleese's memoir to be published this year
Kate Middleton has addressed the rumours that she's pregnant with her fourth child
10 Dublin restaurants with outdoor areas we'll be hitting up for the next 3 weeks
QUIZ: How well do you really remember the first episode of Sabrina The Teenage Witch?
You may also like
1 week ago
Met Éireann predicts a scorcher of a week with highs of 20 degrees across the country
1 month ago
“Intense rainfall” expected as weather warning issued for entire country
1 month ago
Storm Ellen: She's coming tonight and here's everything you need to know
1 month ago
Happy August: Rainfall weather warning issued for 14 counties
3 months ago
Thunderstorm warning issued for entire country, temperatures set to rise to 28 degrees
3 months ago
Make the most of the sun because there's serious downpours a-comin'
Next Page