Enda Kenny's reaction needs to be given time on its own.

Considering that it affects all of us on a day-to-day basis, the budget is no laughing matter.

That said, there was still time for a light-hearted moment or two during the announcement in Dáil Éireann on Tuesday. 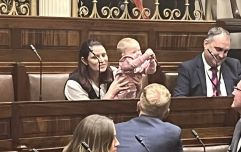 END_OF_DOCUMENT_TOKEN_TO_BE_REPLACED

While announcing the increased €107 million in funding for the Rural Development programme, Minister for Public Expenditure and Reform, Paschal Donohoe, singled out the €25million for the Animal Welfare Scheme for Sheep for special mention.

The announcement drew quite the reaction from members of Dáil Éireann, noise that was punctured only by an anonymous TD who could clearly be heard making bleating noises in the background (skip to around 0:20 below).

The Taoiseach certainly got a kick out of it anyway; maybe he was thinking he had seen something like this before.

Thanks to the boys at JOE.ie for this story.

popular
Molly-Mae Hague fans think they officially know her baby's name – and it means cloud
Baby found unattended in pram in Dublin, Gardaí reveal
Joanna Cooper heartbroken after her mum is diagnosed with dementia
Tasha Ghouri hits back at another islander who called her relationship fake
Blake Lively cast in film adaption of It Ends With Us
"I feel like I lost myself": Nathalie Lennon on her mental health struggles and her latest project with Pieta
Anne Hathaway shares disappointing news about The Princess Diaries 3
You may also like
1 year ago
Vigil held at the Dáil to mark nine years since Savita Halappanavar's death
3 years ago
Female TDs and senators to be permitted to breastfeed in the Dáil chamber
4 years ago
Ireland could soon be getting its own Independence Day
5 years ago
"We must act" - Micheál Martin in favour of repealing Eighth Amendment
5 years ago
Historic moments during Repeal the Eighth Amendment Dáil debate
5 years ago
Wow! The incredible moment 25 handmaidens marched on the Dáil
Next Page